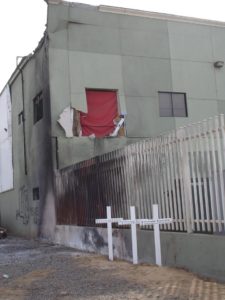 As I think of my father I remember long games of touch football in the street surrounded by all the neighbor kids, and my dad, though only 5’7”, “towering” above us as the “all-American” quarterback. I think of basketball games with my hyper dad yelling battle cries to intimidate all of us kids so that he could drive his way home to the basket. I remember him as the coach of 2 little league teams, my brother’s and mine. And the many hours leading Indian Guides and Sunday School classes. Endless hours in cars driving to and from events. I remember my father at the end of the night reading devotionals to his kids just before prayer. Now, to be honest, my father was not the greatest of athletes by any means, nor the best of theologians, nor the greatest of communicators, and he certainly was not a good driver, but he was there.

By profession he was a doctor of dental surgery, a dentist, and in this he did excel. He had used dentistry to deliver him from the abject poverty in which he had been raised. I used to call him a “dental savant”, because although he could not remember your name, or communicate to you in layman’s terms, (“Son, the mechanical articulator is the dayna natholator which simulates excursive articulations in the dyothoroidalmaginglimus or the temporomandibular joint” (as a hypothetical example) when responding to a six-year-old’s question as to why my jaw hurts), he was a fantastic dentist who could remember that you had idiopathic internal resorption in your bi-cusped eight years prior. He was gracious to use this one sharp knife, which God had given him to serve others. As a self-supporting missionary, often he would journey his way by small aircraft to the depths Mexico to aid an Indian tribe in need of care. To be sure he was only one man in the onslaught of rotting teeth, but he was there.

Funny how in the plethora of events experienced what I remember most is that he gave me, his time. One of the most endeared elements of our lives is our time, and often we are very reticent to surrender any to others, especially strangers. Sadly enough we see many parents who are not so generous with the investment of time, yet, what a return it yields. I may not remember all he said, or the points of any games, nor the trips themselves, but he was there.

The phone call in the early evening on September 8, 2006 informed me that my father’s plane had exploded in mid-air, on approach to the runway in Ensenada. Cause of death: Total Carbonization. He died as he had lived, serving others in an effort to reveal his Father who is in heaven. Later, I tried to call my stepmother using the voice command on my phone. “Call Dad-Home!”, I pronounced clearly. Suddenly, it hit me that God had already done that. My dad had failed to make it to his earthy destination some 400 feet short of the runway, yet, he had made it all the way home. God had called him to his eternal home with Him rather suddenly, but he was there.

My dad lived out Mark 10:43-44, “whoever wishes to become great among you shall be your servant; and whoever wishes to be first among you shall be slave of all.” I honor my father as a great man, because he was a living example of the servant-mindedness of Christ. He lived out what he believed about his Savior. Jesus Christ, the greatest servant ever, had not sinned, had not deserved to be placed upon the cross to bear the sins of the world, and had not done anything meriting death, but He was there.

Fathers, I encourage you not to downplay the investment of time in your children’s lives; it is instrumental in helping them see the love of the Lord through you. Be there!

Have a blessed Father’s Day!