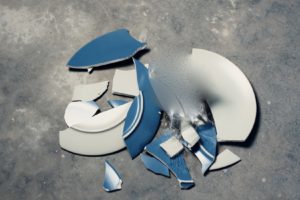 I remember as a kid the guy at a carnival or a magic show spinning plates on top of spindly sticks. In order to keep them from falling, he needed to give them a little flick-spin every so often so that their gyroscopic force would keep them “afloat.” To ensure the tension, the act was performed against the backdrop of “Saber Dance,” a frenetic circus-themed overture, and the performer would usually clown around with some sort of comedy panic routine. If he did not get to one quickly enough as it was slowing down, it would wobble and begin to fall, and the crowd would root and scream. Seems I remember the guy successfully launching 40 some plates and keeping them going for a period until the overall collapse ensued, though I have heard of higher “broken” records.

It is not difficult for me to see the overlay of life in the 21st century. In an effort to keep up with the “Joneses” each one of us has our assortment of plates spinning at various speeds and at different levels of “wobbly-ness,” sometimes so many, that many are receiving the minimal amount of attention just to keep them from an ignominious dismount. One of the plates sadly enough in our lives is the one precariously perched on a distant spindle and need of greater attention- our spiritual relationship with God.

Let’s see, how far can we stretch this metaphor? What are the rest of those “plates” with which we deal? Well, a big one is work. SPIN. Then there’s the home life, family and maintenance. SPIN. Sports, hobbies, banking, gardening, school. SPIN. Church activities. Social calendar. Community obligations. SPIN. Entertainment. Exercise and health concerns. SPIN. Kids events. Eating. SPIN. Taxes. SPIN SPIN SPIN. And let us not forget the task of sleeping. We continue to add “plates” just to the breaking point, as we periodically gain control over the unstable areas. Every one of these demands a little flick-spin every so often – minimal as it may be.

I realize many of these “plates” are necessary to make life work, but many are not, at least not to the degree that we elevate them. Thus, we have become so familiar with the “The tyranny of the urgent”, that chaos is the new normal.

Ecclesiastes 2:1-11 gives us a pretty dismal account of the outcome of pure business for business’ sake. The writer boasts of all that he did to achieve fulfillment: self-indulgence, folly, building, grow, enrich, gain, slavery, money, entertainment and yes, even concubines. SPIN SPIN SPIN SPIN. He engaged in everything he thought would satisfy, trying to reach the pinnacle of satisfaction, but then Ecclesiastes 2:11 informs us of the result, “Thus I considered all my activities which my hands had done and the labor which I had exerted, and behold all was vanity and striving after wind and there was no profit under the sun.”

What he is saying is that his efforts, though perhaps well intended, were really only going to yield emptiness. The craziness of life had engulfed him and he couldn’t discern between his desires and his godly purpose. Does it not make more sense that in the midst of the sound and the fury we pursue a quiet resolve of our purpose?

The chapter finishes up with enlightenment – “There is nothing better for a man than to eat and drink and tell himself that his labor is good. This also I have seen that it is from the hand of God. For who can eat and who can have enjoyment without Him?” (Ecclesiastes 2:24-25).

The result of our labors is to be celebrated, keeping in mind however, that they are worthless without acknowledgment of God in them. No matter what it looks like, nothing can really be enjoyed absent the presence and blessing of God.

So, how’s your “saber dance” coming along? Plates wobbly? Getting tired? Just how long has it been since you have experienced the quiet resolve that all those things you are doing have the blessing of God?

Maybe it’s time to carefully re-evaluate the truly important plates which deserve the proper amount of attention, and let some of the others fall as they may in order to bring balance.

God be with you.