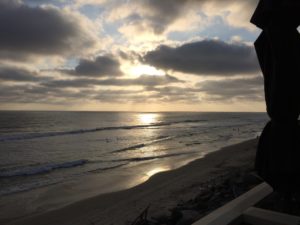 As a child many times I went out in search of the intrepid grunion. The legendary fish was said to come into shore at mysterious hours of the night to spawn whereupon they could be grasped with the mere hand. But if there was any light or disturbance they would postpone their arrival or relocate to another venue. Many times I waited in a sleeping bag with a bucket for the time when they would arrive in the wee morning hours for their mating dance, but alas, they did not. I began to think they could just be a myth in the same caliber as the fabled unicorn, but the best I could say was that they were not real to me each of those nights.

Here’s my point. I was told they existed but had never actually observed them in reality. Could I conclusively insist that they did not exist anywhere? No, of course not. I could only assert that in my geographic sphere, they were not observably factual to me. They were not a part of my perceived reality. Back to the unicorn, actually I cannot offer empirical evidence to you that all unicorn do not exist; in order for me to do that I would have to track down every single unicorn everywhere which does not exist and show them to you, which as you can understand is logically impossible. (Yes, that does make sense.)

After all, it could be that as I was tracking down a unicorn that he strategically kept himself at bay, on the other side of world, or minimally out of my sight. Because I cannot be simultaneously in every place assuring myself that all places were absent of a unicorn, I could not be certain that unicorns do not exist nor could I categorically prove they were a myth.

Bear with me, there is a point. You see, I would suggest that a logical argument that God does not exist cannot be made; philosophically speaking, it is absolutely impossible to defend a negative absolute. Logically, without hardcore evidence, you cannot argue for the non-existence of anything. Sure, you can argue for, and prove the existence of things or persons, but when it comes to arguing against the existence of anything there is no conclusive all-encompassing body of proof. Whew!

So when it comes to atheism, the assertion or belief that God does not exist; how can someone defend that position? I believe the answer is, he can’t, because he cannot argue that a spirit (God) is nowhere to be found. The best that an atheist can argue is, “huh uh!”, or “I don’t think so.” Or, “I didn’t perceive him to be where I was looking.” A non-god after all would not produce a body of argumentation asserting his own non-existence. (That makes sense too).

So I would submit that the atheist can never develop a clear-cut case against the existence of God; the best that he or she can do is refute or attack that which affirms the existence of God, or simply move themselves to the category of agnostic, meaning that they are “uncertain” of God’s existence.

So you see, the exercise to gather all the proof against the existence of God is truly a fool’s errand. All an “atheist” can conclusively speak is that they personally have not found God to be real in their own reality…yet.

What can be argued is the existence of God. So, the greater rational question is what evidence, or revelation (if any) do we have that speaks to the existence of God? Through creation (general revelation) we get some affirmation that God is, though not who He is. It’s quite assured however that pessimists would categorically dismiss these complexities of nature to random reversals of entropy rather than intricate evidences of a Creator. (Yeah, that does make sense).

Quite often an epistemological argument (an argument of truthfulness, knowledge or fact) of anything begins with evidence or testimony. I may look for someone who has actually had the fortune of coming face to face with a unicorn, in which case I could possibly begin to build a case for their existence. But nobody that I know of is arguing for the existence of a unicorn.

For the record I don’t believe that unicorn are real, but that is primarily because I have been told by the human community et al that they are mythological, and I have never met or heard of anybody who has really engaged with one. I take it on faith and trust that there does not exist a little pony-type creature with a spiral horn protruding from its head. Or Sasquatch, the Lock Ness Monster or the Easter Bunny, Zeus, Mercury or Cupid. The thing is, I don’t know of a credible, lucid source who is promoting the existence of any of these.

In the case of grunion I may come to believe after I seek out someone who has seen, caught, cooked or tasted of them. Or I may finally have the distinct reality of engaging with the creatures. You may be pleased to note that eventually I did come face to face with grunion and found they really do exist. They became real to me at the time they, 1) revealed themselves to me and, 2) I understood they were real, (and yes, that does make sense).

Of greater value is that I came to understand the reality of God through His self-revelation. The only way that we know God to truly exist is through His revelation both general (creation) and special (such as the Bible and Jesus Christ).

Now I would agree that in the absence of undeniable incontrovertible empirical truth, belief in something is as unreasonable as a denial of the existence of something without corresponding evidence. Therefore something is needed in order to foster belief, (in the Christian perspective, this is called “faith”), this something is called “revelation.” Kant postulated that God could not be proven, and I would agree that without proper evidence, that is true. He also argued that the mind of God could not even be fathomed by the human mind. Again true if God does not reveal himself at our level, which He did in history, in Christ, and recorded in the Bible. And to be logically fair Biblical historicity must be measured at the same level as secular history, since both are “empirically unverifiable” or they are not.

If an agnostic truly wishes to dispel truth in the Almighty, or would seek to minimize the Christian God of Creation (Christian theism), he or she would need to strike at the heart of Christian revelation – the Bible. Are we confident, maybe even a little arrogant to invite such an attack? Maybe so, but for thousands of years it has stood the test of historical accuracy and scientific sustainability. It has been breathed from the mouth of God; the hope of the future of mankind’s salvation rests upon the revelation therein; it will withstand any authentic test.

My challenge is: when you take your best shot to erode or disprove the Word of God and its message of salvation, and you fail – please consider that the words are truth, and that they apply to you as well. And then respond accordingly.

(And that does makes some of the best sense of all).