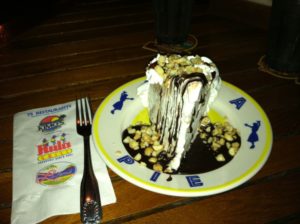 I remember the image well. The Tramp and Lady have tug-o-warred over a spaghetti noodle and at long last Tramp has conceded the final meatball on the plate. He gently rolls it over to her side of the plate with his nose, a certain sign of giving to one who he truly holds so dear. One of the most notable demonstrations of pasta chivalry imparted to celluloid. The scene is from the movie, “Lady and the Tramp,” though, his behavior is anything but trampish.

I must confess that that sort of chivalry has not been evidenced all too often in the Larson household, at least when there is food, and especially where desserts are involved. And when it comes to the sharing of Hula Pie at Duke’s all bets are off. Macadamia ice cream in an Oreo crust, topped with macadamias, fudge and whipped cream… Delectable.

After years of battle, with sparks flying off of the forks, my wife and I have reached a negotiated “treaty.” As one of us eats more rapidly than the other we felt it best for a line to be drawn down the middle of the dessert, that way one would not benefit more than the other due to faster eating. One is permitted to cut the straightest of lines with surgical precision, assuring that no one party will be the recipient of a greater portion. The other party has the option to select the piece desired. This seems to have solved the problem save that of the pleading eyes which observe the final swallows of my portion. Is it really that good? Yes. It really is that good.

It is definitely not natural for us to concede the last bite to anybody else. Rather, it is ingrained in us to look out for ourselves, to indulge ourselves, to cover our own desires and our own self-interests before others. Definitely NOT what Paul had in mind when he cautions in Philippians 2:3-4, “Do nothing from selfishness or empty conceit, but with humility of mind regard one another as more important than yourselves; do not merely look out for your own personal interests, but also for the interests of others.” Did you catch that? “More important than yourselves.” We are to regard ourselves as less important than others. Do we do that?

If you’re looking at the same world I see, it is a world filled with, “Me first!” if not, “Me Only!” It is a world with little time to address the needs or concerns of others. It is a world consumed with individualism. What a very sad state of affairs we are in.

Unselfish behavior is very seldom seen in the world today, but neither is it often evidenced within the Church. On the other hand what a radical witness it would be if society at large could catch a glimpse of the Church practicing intentional acts of placing others first! Don’t we really have enough already?

“Where do I start?” you ask. Start right where you are, with family, at work, and in your church. Let’s pray for an epidemic of unity and unselfishness this year.

Push the last meatball over to the other side of the plate.