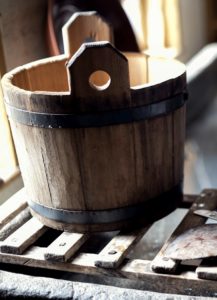 Much has been ballyhooed of late regarding what has been termed ‘The Bucket List,’ a hypothetical container housing all those accomplishments an individual would like to achieve prior to his or her death; a crude colloquialism referring to “Kicking the Bucket.” Although these could hold any variety of experiences, they generally are limited to a self-absorbed, self-indulgent nature. It may consist of earning a degree, climbing a particular mountain, running a marathon, parachute jumping, visiting a particular place, or simply passing some other seemingly previously-before-thought insurmountable barrier.

Appropriately enough, the ‘Bucket List’ of Christ is not so self-indulgent, rather up until the very end He is absorbed in serving others – denial of His own human will, obedience to the Father, dying for the sins of the world and setting an example of servitude to his disciples. Not days, but hours before he is to hang sacrificially upon the cross, He meets unceremoniously to set an example as to how His followers are to exhibit love to each other after he departs – only Christ’s bucket was, well, a basin.

Jerusalem was buzzing with throngs of pilgrims who have made their way to the great city to celebrate the Passover – the remembrance of the delivery of God’s people from the yoke of slavery in Egypt. In the upper room, in the midst of that context Christ had just instituted the Lord’s Supper – the commemorative meal identifying the work which He is to perform – ultimate sacrifice for the sins of the world to deliver man from the yoke of slavery to sin.

It is against this backdrop that the disciples begin to argue as to who is the greatest in the kingdom of heaven (Luke 22:24). God’s response is one of gracious humility rather than scornful rebuke. John 13:5-6 says, “[Christ] got up from supper, and laid aside His garments; and taking a towel, He girded Himself. Then He poured water into the basin, and began to wash the disciples’ feet and to wipe them with the towel with which He was girded.”

If anyone had the right to claim “the greatest” it was Jesus, yet He models servant leadership in the midst of the conflict. The King of all creation stoops to battered soles which were caked with sweat and dirt, times 12. He pours water over them, and the water turns murkier and darker with each cleansed sole. Seems to me Christ is communicating the privilege of serving others in the body of Christ, to build them up; that others would be in pure fellowship with God. But He doesn’t want it to stop there.

Perhaps the lamps glimmer in the dimly lit upper room. Perhaps there is noise in the distance as people scurry about outside and donkeys bray. Perhaps the 12 are thinking, “What just happened?” I can only imagine the silence and conviction exhibited by the 12 as they watched Jesus resume his position at the table. John 13:14-15 adds, “If I then, the Lord and the Teacher, washed your feet, you also ought to wash one another’s feet. For I gave you an example that you also should do as I did to you.”

By extension, I understand this act is not limited to the disciples, but to all the elect in Christ. And let us be careful not to limit this to the one act of foot washing. Rather, we are to serve. To encourage. To build up. To stimulate others to love and good deeds. It’s not always easy. It’s not about being fun or glamorous; in fact, the water gets downright filthy at times. We are called to walk alongside of the elect in the privileged journey of holiness, and that includes the nitty gritty of spiritual service and accountability.

The bucket list of Christ was all about obedience, doing the will of the Father, servant leadership, nurturing, 3 nails, a cross, the yoke of all the world’s sin, and restoration. Pretty high-bar!

And let’s be sure to give God the glory!