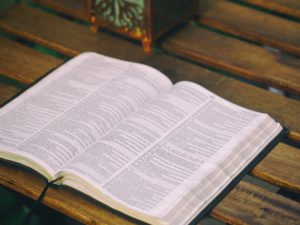 Bibles have indeed come a long way since the days of massive scrolls needing to be rolled out in order to be read. Along came the modern style books which allowed it to be read with much greater ease having been nicely bound in one volume. Eventually in 1455 came the printing press which put the book into many more households. Truly a blessing to the masses. And even since those days we have continued to see developments to the presentation of God’s Word, some for the better, some…I am not so sure about.

For example, most of us are the privileged owners of a study Bible of some sort: God’s Word readily packaged with handy insightful notes to accompany our reading. Many Bibles come replete with maps and even some have pictures. Of the newer developments are the audio Bibles and even now the dramatized versions by actors, complete with music soundtracks and effects. I wonder what could possibly be next to facilitate an effortless time of devotion in the Word. What about a “scratch and sniff” Bible?

Can you image what it would be like to smell the freshness of the Garden of Eden, the new foliage, the unpolluted air, the water ions filling creation? What about the sulfuric stench of Sodom and Gomorrah? Or maybe the scent of the Levitical sacrifices rising up as an aroma pleasing to the Lord? How about smelling the broken bottle of perfume in John 12:3 when Mary anoints Jesus for His burial? “Mary then took a pound of very costly perfume of pure nard, and anointed the feet of Jesus and wiped His feet with her hair; and the house was filled with the fragrance of the perfume.”

I guess if the mind runs wild all sorts of Bible options could be generated. A tactile Bible where you could feel Gideon’s fleece. A 3-D Bible where we see the archers arrow pierce Ahab’s side.  A Virtual Bible where, “You too are part of the Story!” complete with your own lines. Don’t get me wrong, I am all in favor of stimulating reading in the Word but where do we draw the line?

Here is my concern: how far do we go until Christians are just a group of people who are seeking to be entertained? Or until someone is spoon-feeding us the Word? What sort of simplicity does it take to entice us to spend time in the Word of God? We have it so made and yet we fail to invest time in the study of His Word. What’s up with that? Something tells me there is a component of discipline that ought to be part of the equation.

Hebrews 5:12-13 admonishes, “For though by this time you ought to be teachers, you have need again for someone to teach you the elementary principles of the oracles of God, and you have come to need milk and not solid food. For everyone who partakes only of milk is not accustomed to the word of righteousness, for he is an infant.”

The problem addressed by the writer of Hebrews is a failure of God’s people to spiritually mature, or grow up. My fear is that we have become people of such convenience that we do not delve into the intricacies of God’s Word on a regular and substantial basis, but rather we let someone else pre-digest it for us and serve it up as prepared baby food. Though it is not always easy to engage in disciplined study, some of the greatest truths are those revealed through our diligent excavation of the Truth.

It’s time to leave the milk behind. It’s time we begin to dine on the main course once again. So, sink your teeth (and your mind and heart) into a steady, solid diet of the Word of God.