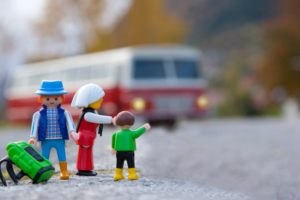 I remember as a child the super-hero shows of the sixties; Batman, Superman, even the Green Hornet. They were the action heroes of society meant to curb evil and give victory to the American way. In order to do this, they battled all sorts of arch-criminals: the Joker, Lex Luther and the Black Hornet. I particularly remember the graphics that appeared during Batman’s fights- Zap! Pow! Sock! Bam! Whack! Crunch! Splat! Bonk! Kapow! As I thought about it that struck me as funny, they are action heroes and the words that appeared were those of action, they were not graphics of contemplation, nor thought, nor speculation, nor thinking, nor planning ad nauseum.

Perhaps, this is not all that insightful, yet it is significant. It would be hard to call them action figures if they were merely conceptualizing plans of attack, yet not actually performing any valuable function. Evil would have been running rampant if Batman would have only threatened to think about thwarting the evil-doers. If Superman had only pondered flying at the speed of light to curtail bad behavior, where would we be? In order for things to get done something needed to be performed.

Nothing new in that profundity, but again, highly significant. Same goes for actions in the spiritual life. James makes that clear in his epistle. In James 1:22-24 we read the exhortation, “But prove yourselves doers of the word, and not merely hearers who delude themselves. For if anyone is a hearer of the word and not a doer, he is like a man who looks at his natural face in a mirror; for once he has looked at himself and gone away, he has immediately forgotten what kind of person he was.”

What James is making clear is that it is not good enough to have a mind full of the wisdom of the Word if we are not manifesting it in our everyday lives. If we say we embrace God and His Word, yet fail to exhibit it through action in our lives, we are delusional. We see ourselves “differently” than we really are; our spiritual health is only imaginary! Once we leave the church or the Bible study, we leave that noble position behind.

As a result, very little gets accomplished. People around us don’t see change. They don’t see the power of God in our lives. They don’t see fruit being borne. The Word has not taken root. And all in all, it is a waste of time. As James says again in 2:17, “Even so faith, if it has no works, is dead, being by itself.” God has not called us to be passive with His Word, but active. God has called us all to be super-heroes, to be action figures, to be doers of the Word. And we have the power of God to enable us to do that for His glory. Aquaman and Wonder Woman have nothing on us!

Be an action figure! Be a super-hero. Be faithful. Don’t just read the Word of God…Do something with it!