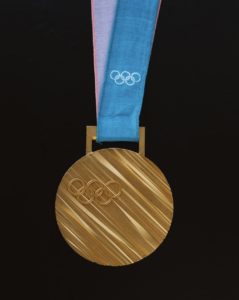 When it came to competition, I was not unlike other kids who wanted to win and show-off a shiny, trophy. I wanted to win the prize and let everyone see I was the best, that I had obtained the pinnacle of recognition, and that the world would have to recognize the prowess of my endeavors. I won the pine-box derby. I was on the first-place team in the basketball league. I won the golf tournament. And for the effort, I had shiny trophies to show off.

Those memories have dimmed, and so has every one of those trophies. In fact, long ago those once much-coveted articles found their way into a thrift store or a landfill. There just isn’t much of a market for second-hand trophies. So much effort. So much discipline. So much emotion had gone into the acquisition of such a short-lived idol.

I am not saying that we shouldn’t strive for excellence; those victories are evidences of the peak of our performance at a given point in time. They are good aspirations, but they do tarnish. They grow old. They have no real eternal significance. Scripture encourages us to strive for excellence in the spiritual realm as well, but our goal is something more eternal.

Paul’s encouragement in 1 Corinthians 9:24-25 says, “Do you not know that those who run in a race all run, but only one receives the prize? Run in such a way that you may win.  Everyone who competes in the games exercises self-control in all things. They then do it to receive a perishable wreath, but we an imperishable.” Paul is saying we should pursue spiritual things as though there is only one prize to be won. We are to go “all out.”

Our prize is not a perishable icon that will fade away, but one that we will have for all eternity. The athletes of Paul’s day did not receive a wood-and-brass trophy, but a woven wreath to place upon their heads. Those wreaths would eventually dry out and fall apart. Paul says our trophy, our prize for winning, is an imperishable wreath that will be displayed for eternity.

If we are going to win the prize, we must be intentional. Paul continues his direction to the Corinthians in verse 26, “Therefore I run in such a way, as not without aim; I box in such a way, as not beating the air.”  Unless I miss the mark, Paul is saying, “Land your punches!” “Make your effort count!” Paul has a passion; it is to pursue the goal line at all costs.

But what is that prize of which Paul speaks? Is it heaven or eternal life? No. Heaven is the gift of God through Christ. We cannot earn it; it is the gift of God. Is it a “nicer” state of blessedness in heaven? Again, I don’t think so. Maybe Paul gives us a glimpse in Philippians 3:14, “I press on toward the goal for the prize of the upward call of God in Christ Jesus.” Paul has his eyes on the goal. I believe the call of God in Christ Jesus is the great commission, to make disciples and baptize them in the Name of the Father, Son, and Holy Spirit.

That means our imperishable wreaths are the eternal works of salvation done for His glory done while we are on earth. I think 1 Corinthians 3:12-13 would bear this out. “Now if any man builds on the foundation with gold, silver, precious stones, wood, hay, straw, each man’s work will become evident; for the day will show it because it is to be revealed with fire, and the fire itself will test the quality of each man’s work.” The imperishable wreaths are our work of gold, silver and precious stones, new believers in Christ that themselves will be imperishable.

If we want the imperishable wreath, we had better be in top form. Get in shape! Get in the game. Go all out, and keep your eyes on the prize.