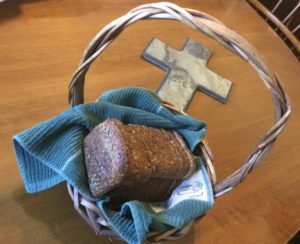 Perhaps I am dating myself with this illustration, but when I was a kid there was a special truck that would come around on a regular basis; it was the Helms Bakery truck. It was a two-toned yellow truck that would move from street to street, sounding its distinctive whistle, offering the most special of fresh breads and treats. Their motto was, “Daily at your door.” Sometimes the products were still warm from the oven when they arrived. People would flag him down or chase him to adjacent streets for the opportunity to buy the loaves of bread that filled the shelves. I can still see operator pulling out the looooong wooden drawers that would house the goods: donuts, pastries, and cookies. Anticipation would heighten the senses as the drawer came out ever farther. Ahhh! The smell of fresh bread! Where was the treat I would savor today?

Bread has long been a staple of nearly every culture. We love it, the texture, the flavor, the way it melts in our mouths. In many ways, bread has been our trusted friend and ally. Bread has long accompanied man through many arduous journeys. Bread has sustained armies when other food sources have failed. And yes, God chose to nourish his chosen people in the wilderness through the gift of manna. Bread is the staple we hold so dear, so it is not unusual that the one staple so abundant in our world is identified with the Messiah, the one who sustains all life.

Have you ever thought about it? Christ was born in Bethlehem, which means “House of Bread.” He was placed in a “manger” which means “to eat”; it was a trough where animals fed. Christ declared himself in John 6:51 to be the Bread of Life, “I am the living bread that came down out of heaven; if anyone eats of this bread, he will live forever; and the bread also which I will give for the life of the world is My flesh.” Long before the foundations of the earth, before the world had awakened to its need, God was preparing a special delivery of bread to be offered up to any who would desire to eat, bread that would sustain life eternal.

For years the Jews had been promised a long-awaited for Messiah. For years they had expected a delivery of one who would redeem and sustain them, yet when He arrived sadly enough, He was not recognized. We continue to remember Christ in the celebration of the Lord’s Supper with bread, a remembrance of the Lord’s body, available to any who would choose to ingest.

Well, the Helms Bakery trucks are no longer running but the Bread of Life is still available to any who would want the redemption, which Christ alone has to offer. As we remember the special delivery this time of year of God’s Bread to the world, let us turn our hearts toward the Savior, the Bread of Life who is still available to everyone, and let us be willing to share Him with a hungry world– THAT is the reason for this season.

He is still available “daily at your door.”