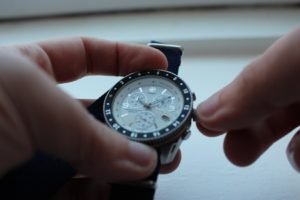 Many people may not remember the old TV commercial about the Timex watch that was tied to a boat or car tire and taken for a ride after which a spokesperson would pronounce, “It takes a licking and keeps on ticking.” It was amazing. Still more amazing is the universes’ oldest chronograph – the Earth. Genesis tells us that the earth was the first planetary orb created. It was around before the sun. Time was being measured in days before the Sun helped us out.

God created the entire universe to attest to His glory. “The heavens declare the glory of God, and the sky above proclaims His handiwork” – Psalm 19:1. What is interesting to contemplate is that time was not existent until God created it for the benefit of mankind. God is eternal, both in the past and the future. He had no need of time. On the fourth day, God created the sun, and the ultimate ‘timepiece’ was created. The earth rotated each day, clicking off the universal “minutes.” The Earth revolved around the sun clicking off the universal “hours.” And, as they say, it has never been the same.

God gives us records of time on the earth as well. We have the seasons to remind us that time marches on, every year they come and go. Planetary orbits. Erosion. Gray Hair. Growing Trees. Why, when you think about it, time is happening all around us.

Yes, the existence of the universe affirms that God is. The function of the universal chronograph is for us, to reveal time. The question is, “Why does God give us this time?” Why are there constant reminders of progression? My suggestion is that God is allowing us to see that this precious life we have been given is finite. Each one of us has a limited number of seconds on this Earth, and then we enter eternity. The seasons, the migrations, the snowmelt, are all there to show us; the writing is on the wall. Each one of our life-clocks is ticking toward eternity.

God is allowing us the time to come to the understanding that He is in control. He made everything around us. The mountains, the seas, animals, life, and the Earth. Though “It takes a licking and keeps on ticking,” Scripture tells us someday the Earth will pass away as well, but until then it is our “Game Clock.” We do not, however, have the benefit of knowing which “quarter” we are in. For some, the time may be shorter than for others, but in any case, it is time to consider who God is, and how we can be at peace with Him.

As we get ready to “wind up” another year… now is the best time to reflect on eternity. We will not be able to tell God, “Gee, I just never really gave you much thought God.” He is a loving God, and not willing that any should perish, but that all would come to repentance (2 Peter 3:9). He sent His Son Jesus Christ so that all who receive Him should not perish, but have everlasting life – Eternity with Him! (John 3:16).

Make peace with Him this season.