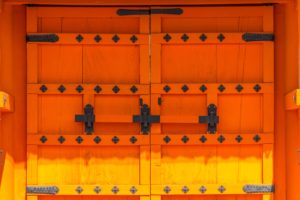 A few months back while channel surfing, I came across the show, “Let’s Make a Deal.” It was a remake of the popular show of the sixties where people would totally humiliate themselves in order to win some cash. Some person dressed as a broccoli would generate a bobby pin and therefore be given a hundred dollars and the option to trade it for whatever was behind Door Number 1. They could work their way up to the finals where they could possibly win a car or, perhaps, a goat with a bell around her neck. All in all, a pretty silly show.

It started me thinking about so many chances we take for a shot at improving our lives. We have no idea what waits behind that mysterious door, yet we are willing to “bet it all,” for the sake of a changed life. How many times do we do that in the real world? How often do we gamble when we have no assurances of what waits on the other side of that door? My greater concern is the gamble many are willing to take when we are given a choice as to how we will spend eternity. Will we get the grand prize or settle for a goat?

1 Corinthians 2:9 tells us, “THINGS WHICH EYE HAS NOT SEEN AND EAR HAS NOT HEARD, AND which HAVE NOT ENTERED THE HEART OF MAN, ALL THAT GOD HAS PREPARED FOR THOSE WHO LOVE HIM.” Hmmmmm. I believe this verse applies to life now and life ever-after. Just a little hint of what is behind the door. So what’s behind the door?

First of all it will be a whole new world. In the book of Revelation, John says he saw, “the new heaven and a new earth for the first heaven and first earth had passed away.” This means that the decay of our ruined world will be made new. No more death and decomposition. Trees and flowers will not reflect the effects of the flood. Paul says, “that the creation itself also will be set free from its slavery to corruption into the freedom of the glory of the children of God. For we know that the whole creation groans and suffers the pains of childbirth together until now” (Romans 8:21-22).

Second, We will be part of the new creation. We will have new bodies, glorified bodies. We will never grow old, become ill, or die. And, there is an amazing heaven for us to enjoy as well. Revelation 21 says that the New Jerusalem, the new heavenly city will be as a most rare jewel having the glory of God, and streets of gold. Wow.

Third, best of all, we will bask in the glory of the Lord. Revelation 21 says, “And the city has no need of the sun or of the moon to shine upon it, for the glory of God has illumined it, and its lamp is the Lamb.” We will spend eternity in fellowship with God. We will spend the rest of time in the presence of His glory (Jude 24). We will celebrate the marriage supper of the Lamb. It will be a feast of fellowship celebration forever.

Yes. It will be great. It is a place Jesus has been working on for at least 2 thousand years (John 14); you can believe it’ll be great.  He is making all things new (Revelation 21:5). One of the best parts of the deal is that what you have to trade for what is behind the door is not a watermelon, a toothbrush, or even a bobby pin. It isn’t cash, a shoe or a nail file, but it is all of your sin. You can trade all of you sin for what awaits you in eternity with God. But you must trade all of your sin.

That is a great deal you should not refuse, my friend.

Don’t settle for the goat! They’re going somewhere else.