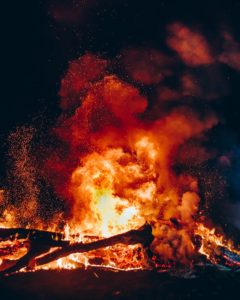 As I write this, late 2017, California has just endured its worst fire season in nearly 100 years, some would say, ever on record. Hundreds of thousands of acres burned. Thousands of homes and cars, countless trees and livestock, and dozens of lives have been lost to the mindless ravages of anhedonic flames. The charred remains are reminders of the many lives which need to be rebuilt if even they can be.

Most of these fires are the product of the smallest of incendiary agents: an unattended candle, a cigarette butt carelessly flung aside, a match tossed too early, or a fire poorly extinguished, a spark. A seemingly insignificant means which has resulted in the scorched earth.

Yes, there is something beautiful, even mysterious about a flame. Whether it is perched and dancing upon a singular candle like a ballerina, or it is a choreography of plumes within a fireplace. Either way, it is alluring. It captures our gaze and we are mesmerized. The flames give light, flames give warmth.

Damage comes when those flames of intrigue are let loose from their safe confinement; they become like little Molotov cocktails tossed carelessly into a pile of turpentine saturated rags…When careless words alight from the lips of someone in the church, the effect is no different.

“You know what I heard…” It begins over a “table of concern” a seemingly innocent, even “holy” arena of prayer after a Bible study. A “concern” is expressed about someone, or something. Like a baton successfully handed to the next link in a compromised chain.

Later in the dimly lit church parking lot that little “unable-to-be-suppressed-yet-professed” morsel is shared with another. Finally, a spouse getting into bed for the evening is compelled to express this concern, “did you hear…?”

Without effort those little arrows have taken flight and begin to travel through the highways and by-ways of human “concern,” throughout digital catacombs, and into the auditory canals of those who are least-able-and-willing to do anything about it, except of course to perpetuate it further. These little flaming arrows are in flight, en route to the most tender of tinder. Relationships. Reputations. Real hearts and real lives.

Meanwhile, some unsuspecting person, perhaps thinking the best of his Christian confidants realizes he is in full battle array with an enemy who refuses to identify itself.

What has just been described is the full-blown arson of gossip. And that gossip, like the flame, needs fuel to survive. The air of individuals fans the flame of destruction. From one person to the next. From one hand to the next. From one set of vocal chords to the next, like a virus that is passed along through host organisms. Through a long line of hosts, “innocent” hosts, so to speak, the invaluable packet of information picks up momentum. That little spark becomes stronger, it craves more fuel. It grows bigger. Mindless. Consuming!

The guilty parties corporately raise their “squeaky-clean” hands palms out, and declare, “But, hey, I was only repeating what I had heard.” Ah, the simple confession of purported absolution. “My hands are clean!”; but, are they?

“See how great a forest is set aflame by such a small fire! And the tongue is a fire, the very world of iniquity; the tongue is set among our members as that which defiles the entire body, and sets on fire the course of our life, and is set on fire by hell. For every species of beasts and birds, of reptiles and creatures of the sea, is tamed and has been tamed by the human race. But no one can tame the tongue; it is a restless evil and full of deadly poison” (James 3:5b-9).

In no case is gossip justified…So why would we choose to do something which is so contrary to scripture? I believe there are three reasons. First, we are honestly ignorant that what we are engaging in is actually a sin. Second, we don’t care that it is wrong, we just can’t resist dropping a whopping bomb. In our depraved human condition, there is just something satisfying about being the first to perpetuate a good poison. The third reason, and perhaps the most common is that we are willing to gossip only after we have sufficiently couched our actions under another name; “care,” “concern,” “innocent sharing” of information. All clear. Light the match. Ignition.

The end-product is the same in all scenarios–scorched earth. Broken relationships. Smeared reputations. Curse.

Yes, James goes on…he says, “With it [the tongue] we bless our Lord and Father, and with it we curse men, who have been made in the likeness of God; from the same mouth come both blessing and cursing. My brethren, these things ought not to be this way” (James 3:10).

No, it should not be that way. But when we gossip, or malign, or slander one another, it is that way; we are cursing them.

Many, if not most would read those words of James 3 and say, “Surely, that is not me. I was only trying to help.” But, I would imagine that some of us will have to look over a scorched ground, and communicate to God how, and why we felt compelled to do that. At some point, we will have to own up to our actions, and say, “Yes, I did do that.” Christ gives a most-sober word of admonishment in Matthew 12:36, “But I tell you that every careless word that people speak, they shall give an accounting for it in the day of judgment.”

We would all do well to heed those words, especially those who would lift their hands, palms out and proclaim, “I am guiltless.”

We would all do well to acknowledge the power of the tongue, and allow the Holy Spirit to have clear title to that small, but influential piece of real estate.

“Death and life are in the power of the tongue,
And those who love it will eat its fruit” (Proverbs 18:21).