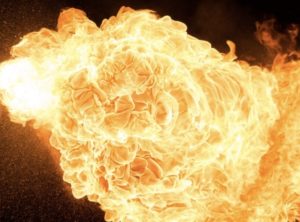 One of the greatest illustrations of faith is played out in the pages of the Old Testament in the book of 1 Kings 18. This showdown is better than any “High Noon” scenario Gary Cooper could deliver. The setting is Mount Carmel in Israel. Elijah has just squared off with the prophets of Baal, 450 of them and 400 prophets of the Asherah. Elijah throws down the gauntlet and asks the prophets to bring forth two bulls to help determine whose god is really God. The Rules: this would be done by calling down fire from heaven to consume the bull. After preparing their bull, the prophets of Baal cut themselves and plead to their god to ignite their offering. It doesn’t happen. Elijah mocks them a bit, but gives them until well past “high noon,” in fact he gave them until evening.

When it’s Elijah’s turn he digs a moat and drenches the sacrifice three times. The water floods the offering and fills the moat. THEN, he calls down fire from Heaven, so that the hand of God Almighty would be revealed and call the people of Israel back to Him. “Whoosh!” This the Lord does in a hasty fashion. The prophets are then rounded up and do their own version of, “Shall we gather at the river?” where they are categorically exterminated.

What impresses me most about Elijah is that he was faced with a seemingly insurmountable trial. Sometimes we forget that he was outnumbered 850 to 1, and if God didn’t “show up” Elijah would have been doomed. Instead of cowering he “grabbed the bull by the horns.” And out of his faith, he made the task more difficult by saturating the sacrifice with water. He trusted God to come through big time, and glorify Himself. And, whatta ya know? God showed up!

The big question is, “Do we welcome adversity into our lives, knowing that God is going to do something great?” Do we shout, “Bring it on, God! I want to see how you will glorify yourself through my trials! My faith can handle it!”? Somehow, I don’t think we do. I know I fall short.

What are we going through right now in which God is working? It is a rare breed that can look into the face of pain, trial or uncertainty and cry out to God that He alone be glorified…at any expense, even at their own expense. Do I have that kind of Faith? Not even. Still, I know God is there. I know He is working in my life. Hopefully, just being aware of what God can do in every situation is a beginning, and knowing that my situation is part of His plan, leads me to respectfully yell, “Bring it on, God!”