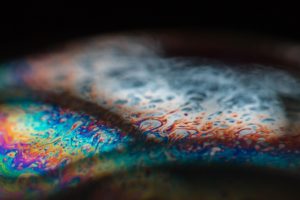 By now, everybody has heard about the massive oil spill in the Gulf. Apparently, what happened is that the crew of the rig disconnected the alarm system so that there would be no unwelcomed alarms in the night. As a result, no alarm system sounded when things began to go wrong thousands of feet below the surface of the water. The drilling rig caught fire and collapsed, 11 people lost their lives, and millions of barrels of raw oil spilled into the gulf over the following months, destined to leave a mark for generations to come. Through that one well, that one hole in the earth, all that damaged spewed over untold miles of earth and countless species.

We think that is a horrible event and yet, that is totally eclipsed by the mayhem created in the garden by the decision of Adam. One simple command issued by God, and Adam didn’t obey it; he disconnected the alarm system, and along with his wife followed the temptation of Satan. Adam refused to obey God and ate from the tree of the knowledge of good and evil and, in doing so, opened up a whole well of devastation upon the human race. Sin. Sin that would spew into the entirety of the human spiritual DNA and sever relationship with God. Sin that would affect all subsequent generations.

Romans 5:12 tells us the way it was, “Therefore, just as through one man sin entered the world, and death through sin, and so death spread to all men, because all sinned.” Just like that uncontrolled well discharging out of control oil, sin was out of control, and covering mankind, introducing death to mankind, both physical death and spiritual death. That’s all men.

Fortunately for humankind, God had a plan in store for us from the foundation of the world, a solution that would eradicate the effects of sin and restore a relationship with God. That solution is explained to us in Romans a little later in verses 18-19, “So then as through one transgression there resulted condemnation to all men, even so through one act of righteousness there resulted justification of life to all men. For as through the one man’s disobedience the many were made sinners, even so through the obedience of the One the many will be made righteous.” Paul is talking about the obedience of Jesus. Jesus was obedient even to the point of death on the cross.

The task of cleaning up the oil spill is certainly daunting. I have to doubt if things will ever be restored to pre-spill days, and if that is the case for an earthly disaster, how much more difficult to rectify the mess of sin in the world. In an attempt to offset this mankind seeks to “do good,” to behave, to give to charities, maybe even to go to church as an absolution from sin. None of these things though will take away the effects of sin, it is only by the blood of Jesus that sin and the effects of sin are conquered.

There is no greater state of emergency than those who are facing eternity without God. As you look at yourself, you may not see that you are immersed in the oily dark smudge of sin but it is there. The question before you is, “Will you allow Jesus to clean it up?” He has already paid the price; all that remains is acceptance of His gift. You can’t do it yourself, and no one else is going to do it for you. He is willing to do it.

Take Him up on His offer.