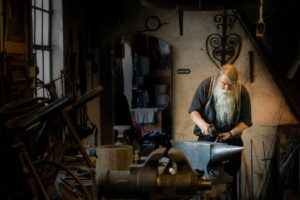 I remember as a kid going to Knott’s Berry Farm. One of the memories that comes to mind is the blacksmith shop. I recall the man taking a blazing red-hot horseshoe out of the fire and placing it on the anvil close at hand. The next step in the process of formation was to strike it with a heavy hammer forging it into the desired shape. Three items were involved in the process: an anvil that in no way was willing to be reformed, a heavy hammer strategically striking down with force, and a malleable object caught between the two.

In order for Christians to be molded we undergo a process as well. The three items involved in this process are similar to those above: the anvil, which is Scripture, the hammer which I will represent as the motivation of the Holy Spirit, and an object which is capable and willing to undergo change, that’s us.

I suggest that Scripture is the anvil against which the character of faith is forged. The anvil does not undergo change during this process, in fact it is resistant to the heaviest of forces. Thus, it would be ridiculous to utilize a lead anvil. In the same way, the rule, or standard against which our lives are modeled must be rigid, unchangeable, authoritative, and correct in the eyes of God, such is His Word. How frustrating it would be to have a Bible which is constantly morphing and whose boundaries were unclear!

Hence, the Word of God is the only such object sufficient to fulfill these requirements. 2 Timothy 3:16 tells us, “All Scripture is inspired by God and profitable for teaching, for reproof, for correction, for training in righteousness.”  This means that God’s Word is to be justifiably used for teaching us proper understanding of God and His will for our lives. It is also for admonishing someone who is in serious behavioral error, for someone who is needing to be doctrinally enlightened, and for the purification, or sanctification advancement.

I am suggesting very reverently that the Holy Spirit is the hammer, the motivating force who is seeking to move us ever closely to the formative power of His Word, to forge us against the steadfast resilience of the Word. He is the Motivator, the Persuader, and at times the Cheer Leader for our success.

In case you don’t know where I am going yet, the object caught in between the two, the horseshoe so-to-speak, is you and me, those who are a raw piece of material the Maker seeks to conform into His image. The need for the object to be malleable is as important here as well as with the horseshoe, if the material is hardened and unable to be molded, change is improbable. Material, which is as hard as the anvil itself, will not undergo reformation.

In order for the Maker to achieve His desired result, He at times permits us to be in the crucible of life to allow us to be softened. The problem with not being malleable is that we can become hardened into that which has no likeness of the Master’s intent. The Bible uses the parallel of clay that has become so hardened in a bad vessel, it can only be broken. Psalm 2:9 says,  “You shall break them with a rod of iron and dash them in pieces like a potter’s vessel.”

If something is not willing or able to be molded, it is worthless to the craftsman, fit only to be broken and thrown into the dump.

If the heat seems to be a little intense around you, it may be that God is readying for work in your life.

Turn to God’s Spirit and His Word. He has great plans in forming you for the better!