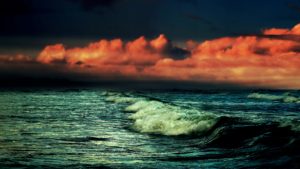 The civil sirens began sounding around 6 a.m. They were signaling a tsunami warning triggered by an 8.8 earthquake in Santiago, Chile. The projected effect was pounding waves in excess of 9 feet hammering the coastal regions of the Hawaiian Islands. Radio warnings advised seeking shelter on higher ground and taking plenty of water.

We were on fumes so we knew we needed to get gasoline. We were not the only ones with that on our minds; the lines were enormous. People wanting to get prepared for the possible shut down of the island were trying to make their way to higher ground. Twenty minutes into the wait, people started pulling out of line; no more gas was available. The time to be prepared had come and gone, those still in need were sent away. Heading up the hill I noticed that the goats of the island had climbed to higher ground and were precariously perched on the side of the cliffs. They seemed to know.

I couldn’t help but see that as a picture of the end times. People find themselves unprepared and at the last minute they try to find help. As people understand the end is near, it is only then that they attempt to make preparations for the future. Will that be how things are in the last days? Will people know the end is upon us and scatter to make their way to higher ground only to find that salvation is not to be found? The opportunity to be rescued will not last forever.

We get a clear warning in the book of Corinthians:

The favourable time is now. Not only is this the time to find salvation but we also have many warnings assuring us that the end is coming. Matthew 24: 4-8 “For many will come in my name, saying, ‘I am the Christ’ and they will lead many astray.  And you will hear of wars and rumors of wars. See that you are not alarmed, for this must take place, but the end is not yet.  For nation will rise against nation, and kingdom against kingdom, and there will be famines and earthquakes in various places.  All these are but the beginning of the birth pains.’”

Sound familiar? We are at the beginning of the end; the birth pangs have begun. That is God’s fair warning. We have no excuse. Now, we don’t know exactly when that will happen, but we do know that could happen at any time. And don’t be fooled, many will come saying they are the Christ, but only Jesus is the Christ who has fulfilled the Messianic prophecies of the Old Testament and can lead us to truth, to God, to life eternal.

Look around. Check it out, and get things right with your Creator. Don’t wait until the return of Christ has come, and you find yourself desperately looking for help only to discover that the station is “out of gas.”

Now is the day of salvation. Not tomorrow. Don’t put it off any longer. Even the goats know the time is near.