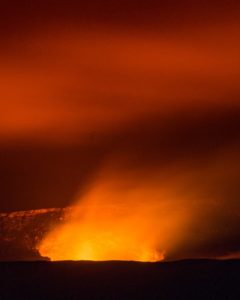 Quick! Where does Satan live? If you are like most people you answered, “Hell.” We all have the impression that a red spandex-clad Satan is residing in Hell with his pitchfork, horns, and a pointed tail stabbing at people only to torture them. Our impression is that Satan hangs out all day checking-in people whom he will be able to subdue, torture, and control for all of eternity. It is a pretty wild thought, to say the least. The only problem is that picture is not supported in Scripture.

The truth is, we do not know if he owns a pitchfork or any other gardening tools for that matter (my guess is that he doesn’t). He does not sport horns and a tail either. Satan is a spirit, he is not a material being at all. Don’t get me wrong though, he is a real being, and he is a powerful entity.

What we do receive from Scripture is that Satan is an egomaniac who fell from grace as he wanted to be a god (Isaiah 14), and he took a third of the angels down with him when he fell (Revelation 12:4). He is the prince of this world but is not in overall control of the world, and he has already been judged (John 16:11). He is here on the earth, and in the spirit world. He is on the move, looking for people to lead astray. 1 Peter 5:8 says, “Be of sober spirit, be on the alert. Your adversary, the devil, prowls around like a roaring lion, seeking someone to devour.” Satan’s goal is to hinder people’s relationships with God!

The fact is he is not even in Hell, at least, not yet. Actually, at the end of the Tribulation, he will be thrown into “The Pit,” his holding cell. After the Millennium, the thousand-year reign of Christ on earth, Satan will be taken from “The Pit,” have an opportunity to run amuck for several years, and then, after all is said and done, at the end of it all, he will be thrown into the Lake of Fire where he will suffer for all of eternity. Even then, he will not have any control there; he will not be president, or king, or ruler of any kind.  Finally, then, death and Hades itself will be thrown into the Lake of Fire, which is called Gehenna, the Greek word for Hell (Revelation 20:14).

So, you see, the once so beautiful, yet fallen angel never gets the control he has really wanted all along. He doesn’t even have power over his own destiny. Just like in the days of Job, Satan only has the authority which God has granted him and only that for a limited amount of time. Does he know this? He certainly does. In fact, I would assert that Satan knows Scripture as well as anybody, in every language imaginable, he just refuses to abide by it. Satan has been, and will continue to be set against the will of God until the end.

Anyway, just a few thoughts I wanted to share that you may not have considered. Lots of interesting events are going to happen in the end times of mankind’s existence on this earth, and much of that involves one of our greatest spiritual foes – the Devil.

Who is Satan? What is his plan? How can we stand against him? All are important questions, and it serves us well to better understand our great adversary: he wants control of you.

Two points of encouragement and exhortation we find in Scripture:

“Therefore, take up the full armor of God, so that you will be able to resist in the evil day, and having done everything, to stand firm”(Ephesians 6:10-18).

“Submit therefore to God. Resist the devil and he will flee from you (James 4:7).

We have not been left with a second-rate defense strategy. God has given to us the divine armor in order to stand firm. Submit, and rest in Him and His power. And, do not engage with the enemy.

Is it always easy? Not quite. But, we learn that our strength is in Christ alone as, “greater is He who is in us than he who is in the world,” and for those of us who are indeed in Christ, we need not worry.

Christ has won the victory!