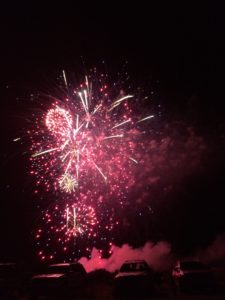 Watching the fireworks at the airport a couple of days ago, I had to ask, “Why do we humans enjoy the celestial explosions so much?” What is it that causes us to “oooh” and “aahhh” at the thunderous boomings which are exciting our auditory and ocular nerves? Our eyes are so amazed by the huge masses of fiery glitter. I had to ask, “Is there something in our DNA that draws us to that?”

I believe that we applaud those occurrences because we are naturally drawn to manifestations of power, whatever they may be. We are drawn to the ocean for its sheer mass, and power. We are excited about old film clips of atomic bombs going off. Tornadoes and hurricanes are wondrous to watch as they toss around boats and houses like they were children’s toys. We love the loud crackling of far-off thunder. We are enthralled by a rainbow. We stand in awe of power, sometimes in abject silence knowing how small we are. Sometimes, affirming it with involuntary groans of exclamation.

I have to believe that we enjoy those demonstrations because God has placed that within our DNA. He has given us the ability to appreciate power, at many times so that we may know His greatness. We are not like the Chihuahua that does not know he is 10 times smaller than the pit bull, but rather, we comprehend we are not the end all of power. We understand power, size, authority and greatness. In short, we know there is a God, and it certainly is not us.

I think God likes “booms” too. After the creation account, He looked at all He had made and called it good. He may have been the only one to see it and hear it (though angelic beings may have been around by then), but He liked it. God appreciated His own power as well, though it was only a partial revelation of His unlimited ability.

God made the universe to glorify Himself. Psalm 19:1 declares, “The heavens are telling of the glory of God; And their expanse is declaring the work of His hands.” God likes power; we like power. God reveals His glory; we love His glory. Much of what God made in this vast universe we may never see, in spite of the amazing technology we have invented, but we know it’s far beyond what we could ever imagine.

One of the sad parts of humanity is when we fail to recognize that all power is from God, and when we fail to give Him recognition. It is then that our DNA is faulty and we think we are “all that and a bag of chips.” We glorify ourselves instead of God. We think that we are the great and mighty creators of power. Those fireworks we make are pretty cool, but fall miserably short of anything due to receive glory. Even the space program and atomic bombs are only firecrackers in comparison to God’s arsenal of power.

I think of that very first “fireworks” display that occurred at the beginning of physical time as God hurled with great force and authority the universe into being. I imagine it was beautiful. I imagine it was majestic, even poetic and magnificently choreographed. And I do suspect it was loud, incredibly loud. And I am convinced God wants us to see that, to comprehend His power, to understand that His power is awesome. What a shame if we choose to explain it away as solely the result of gaseous cosmic ignitions independent of a Creator!

Psalm 145:11 says, “They shall speak of the glory of Your kingdom

And talk of Your power”

Now that is something to talk about!