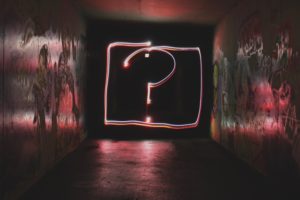 When I was a child there was an engaging learning device put out by a large toy and game manufacturer; it was called the See ‘n’ Say. In effect, it was an analog playback device that, with the pulling of a string, would emit a recording of various sounds in an effort to instruct children. The ones I remember most are the ones with animal sounds. A great little device for house-bound, or city kids who may not have had the opportunity to engage personally with such wildlife or farm animals.

As I think about it one of those animal sounds which was absent from that device was the sound of a wolf. Now, obviously an entire generation did not grow up ignorant of the call of a wolf, but, here on this toy, it was curiously absent. Hey! Incidentally, do they growl? Howl? Yip?…Bark? I am not quite sure…though, I do know they have a call.

I wonder if I could assert that we in the Church could be considered ignorant of what a wolf might say; especially a wolf which seeks to attack the sheep.

The truth of scripture asserts that we are in fact inundated with those canines; and they are within the walls of the Church (Acts 20:28-30). They do their best to deceive, and that means in language deception as well.  Hmmm.

“Wolves in sheep’s clothing” means to me that they appear to be sheep, and that very intentionally they walk like sheep to the extent that they can. They dress like them. And they even talk like sheep to the best of their unregenerate abilities. So, they don’t necessarily deny all of Scripture. They may not spew forth bad words. As terrifying as the reality is, sometimes the wolf simply says, “Baa.” What does that mean? It means they sound like us!

Logically, in light of Scripture, we would affirm this truth, the existence of wolves, but oftentimes we are less than prudent to exercise appropriate needed caution in the Church.

We need to remember however that their motive is not to build up the body, but to deceive. If they are “working for the other side,” then theirs is a grand agenda to steal, kill, and destroy in the body of Christ.

Now, you may say that I sound a bit paranoid, but I do believe I am following a pretty defined trail in Scripture of Satan’s modus operandi.

In Genesis chapter 3, Satan landed upon a pretty successful technique of destruction. As his purpose was to steal, kill and destroy, he set about early establishing his methodology.

“Did he really say that?” The words hover over the as yet uncursed utopia. Seems innocent enough. Sort of logical to question things, I mean, after all, we are logical and inquisitive beings. So, it sure seems like it would be okay to make sure the things we thought we heard were indeed accurate. Right?

But, very clear instructions had been given regarding their actions in the Garden in Genesis chapter 2: 16-17:

“The LORD God commanded the man, saying, ‘From any tree of the garden you may eat freely; but from the tree of the knowledge of good and evil you shall not eat, for in the day that you eat from it you will surely die.’”

One explicit restriction on the behavior of Adam. Very clear parameters with very specific consequences.

In chapter 3 Satan questions the accuracy of the statement, as if to say, “Hey Eve, are you sure you got this right?” “Did God really lay down that restriction?”

I imagine this doe-eyed girl, blinking in naïveté, taking on the Great Deceiver. Right there, in her willingness to engage with him she was going down. And yet, each time I read that, I am rooting for her to choose differently. Still, each time she fumbles on the one-yard line, misquoting the words of God in adding the phrase, “or touch it.”

At this point Satan moves in for the kill as he outright challenges the veracity of God’s words. He communicates that “You will not die” as a consequence of disobedience. And, he elaborates on the divine motive, that God is somehow trying to keep mankind from experiencing divinity herself. According to Satan, God is hiding a blessing from them in the forbidden fruit.

“There’s something good in there Eve. And there is no penalty!” is what he seems to communicate.”

And our hearts cry out, “Say something, Adam! The future of the entire human race depends upon it!”

And so, there you have it…The modus operandi is tried and found successful.  And how many supposed Christian theologians under the guise of promoting a quest for new orthodoxy do we see posing like-spirited questions in opposition to Christian truth. From the Judaizers to Arian. From Pelagius to Smith and Baker Eddy.  From the modernists to modern-day wolves.

Asked in the most reverent of ways in feigned concern and conservative rhetoric, these challenges are often strategically dropped like acid, in order to erode the divine truth. Under the guise of innocent intellectual discovery the wolf seeks to attack historically accepted evangelical orthodoxy.

So, what does the wolf say? Effectively, he says, “We may just have missed what the Bible was trying to communicate. We may have got it all wrong.” “Can we just revisit what we think we know?” I know there is a tender tension here between valid insights, and intentional desire to mislead the sheep, but we had better know what things a wolf might say in order to make a better defense than Eve.

A few words of caution:

Don’t get me wrong. I am all in favor of asking genuine questions. As Christians we don’t have it all figured out, and sometimes our dogma shouldn’t be so dogmatic. Other times, many times, we don’t need to challenge what God has clearly said through His Word; we need to strive to understand it. When some new great revelation is presented which stands in opposition to overwhelmingly understood orthodoxy, we need to stand up and take notice, perhaps push back. To this end, every true teacher, in light of the Berean example needs to welcome investigation of his teaching in light of Scripture.

I know it’s difficult. If they look like sheep, and they talk like sheep, then what chance to we have? Well, Christ says in Matthew 7:20, “So then, you will know them by their fruits.” That may not sound like the greatest of help, but at least we are not stranded. It means a great deal of discernment and observation is in order.

All I am saying is, “Let’s be careful out there.”