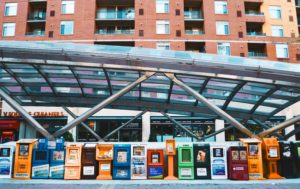 Words come. Words go. It appears words migrate through a life-span of sorts. Some begin as an idiom, a slang and then gradually morph into one of greater understanding, ending up in a word museum of antiquity somewhere in Anhedonia (Can you say…Corset? Fortran? Britches, dungarees, or davenport?). Some we have no clear idea from where they come.  Others take on an initial meaning and then evolve into one representing something altogether different from that first proposed (cool, or boss)…I believe the term “evangelical” is one such term which has been hijacked, modified, contorted, and consequently is slotted by some to be relegated to word oblivion.

Initially used to categorize one who embraces the “Good News,” the reaffirmed Gospel in the 16th century this term has been bludgeoned to the point of virtual unrecognizability. Initially, it described the good news delivered through the Bible to the plight of sinful man through the person and work of Jesus Christ on the Cross. Sadly, however, it is “worn” by pirates who have dulled the edges of such a term to the broader context of mere “Christian,” another term which has taken a beating in definition.

On the surface I am pretty well identifiable as a conservative. Cut a little deeper and you will find that I am truly evangelical. In fact, if you were to cut deep enough you will find I bleed a bit of the scarlet blood of a fundamentalist as well–Fee-Fi-Fo-Fum, and all. But, talk about a word that imports much too much controversy!

But agreed, the term evangelical has taken a beating–hijacked to greatly represent a political position. So, we could surrender the term, adopt another until that gets distorted, and then find another, or we could stand our ground reasserting a correct understanding, using that opportunity itself to boast in Christ.

So, let me try to cite some touchstones of the term, evangelical:

First, our stance is Biblical. We stand on the sufficiency, clarity, authority and necessity of Scripture to instruct our lives unto salvation. We have no need for additional revelation, traditions, or magisteriums to establish our direction. We are governed by the transcendent truth of Scripture. We are committed to the Bible as the cornerstone of truth: the understanding of salvation is presented sufficiently, and completely through the Word of God. The Bible is our ultimate authority–it is God’s word: breathed of God, expressing the will of God, for us.

Second, this evangelical stance is Christological; it is focused upon the person and work of Jesus Christ upon the Cross. At the core, evangelicalism identifies the gospel as salvation by grace through faith in the work (atonement of sin) of Jesus Christ. Evangelicals understand that there is one way to God, one very narrow road to redemption, and that is through the path paved by Jesus’ sacrifice at Calvary.

Third, this stance requires an action–a step of faith; evangelicalism is not one which is merely cognitive. We are first and foremost Christians, or Christ-followers who have been called out of the domain of darkness, and delivered into the Kingdom of His beloved Son, who are now commissioned to be light and salt, communicators of the Gospel to the world around us which is still in need. The idea is that we needed to have made a decision at some point along the way to follow Him, one in which we placed our faith in Christ as the object of our salvation. Biblical terminology would affirm that we must have had a “born again” experience, not simply that we have consented to the veracity of some truths of Scripture.

A fourth marker of what it means to be evangelical, is simply that fruit is being borne. Very simply, subsequent to conversion, something has been produced in our lives which was a definite sign of the supernatural working through us–a very clear marker that God’s Holy Spirit is residing in, and transforming us into the image of Christ.

The world will continue to highjack our terms, and we will seek out others. So, we can stake our ground and use it to define the Gospel and who we are, or we can choose to redefine our monikers every few decades, only to pull those stakes up later, and repost them elsewhere.

The gospel is at the heart of what it means to be evangelical. The Good News! The Good news that man can once again savor an incredible relationship with his Creator…through the work of Christ.

“He made Him who knew no sinto be sin on our behalf, so that we might become the righteousness of God in Him” (2 Corinthians 5:21).

What good news! And, that’s the camp I live in.