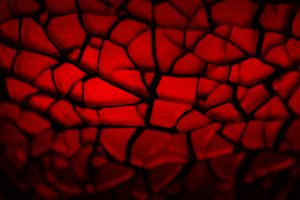 It strikes me that we may be a little desensitized nowadays. We might see movies in which we see blood and gore, and not be affected or even concerned about the horrendous loss of life. Or, we might just ask, “Is that really necessary?” and continue eating our popcorn. And yet, when it gets down to it, those movies are often only for gratuitous shock value.

But there was a purpose when God called for sacrifices at the Tabernacle or the Temple. I also believe there’s a very real purpose for God to have blood red; because it is very pronounced. You know when you have hurt yourself, your body begins alerting you immediately.

We get a very dramatic, yet intentional picture of blood in 1 Kings chapter 8. Solomon is consecrating the Temple here, as he’s bring the ark in.

Verse five of chapter eight in First Kings says, “Then King Solomon and all the congregation of Israel, who were assembled with him, were with him before the Ark, sacrificing so many sheep and oxen that they could not be counted or numbered.”

Whatever that number is, may I suggest that it is a number greater than 22,000 oxen, and it’s greater than 120,000 sheep. Because at the end of the chapter in verse 62 through 64, we see that the offerings either continue, or are identified. Verses 62-63 says, “Now the king and all Israel with him offered sacrifice before the Lord. Solomon offered for the sacrifice of peace offerings which he offered to the Lord 22,000 oxen and 120,000 sheep.” Here’s my point: those sacrifices were able to be numbered; pretty big numbers yet, they were still able to be numbered. May I suggest that in the beginning of the chapter if those sacrifices being offered were such that they could not be numbered, then they were in excess of 22,000 and 120,000 animals respsectively. I would even suggest that that number would be substantially greater than 22,000 bulls and greater than 120,000 sheep. Thus, at least doubling that amount of sacrifice that’s taking place in the whole realm of consecrating that temple.

Now, try to get your mind around the thought that there was an area that was dedicated for the offerings, and it was entirely overwhelmed. That’s an understatement–120,000 sheep, and 22,000 bulls and then some! To get the perspective on this we need to understand that they are inviting a holy God to dwell in that Temple; the blood paves the way for the people to have a relationship with God. That blood had to be shed.

It gives you a pretty visual picture which speaks volumes. Remember, the blood is red, it’s coming off the altar area, and it’s flowing down as a river under the perimeter wall outside of the city; it’s flowing toward the Kidron. The blood of bulls and sheep, enough to fill nearly 39 swimming pools with blood is flowing as a reminder for all to see of the price paid for this relationship with the Sovereign.

You get the picture, the redness, the stickiness of blood all over everything because without the shedding of blood, there’s no remission of sin. But may I also point out that in the Old Testament, the sin was not taken away. That payment of blood was an “interest only” payment. It allowed the people to have fellowship with God. It invited the holy God to come and to dwell in that temple, but it did not take away the sin. It allowed a temporary fellowship with God, but it’s not until the true sacrifice of the Lamb of God is offered up that the principal of that debt is paid as well. In Hebrews, we get a clear picture, and with that vision in your mind of the Temple, and the blood flowing for a long time, however long it takes for that much blood to drain, we get that contrast when Christ makes a sacrifice of roughly one and a half gallons of divine blood upon the altar of the Cross.

Hebrews 9:11-12 says, “but when Christ appeared as a high priest of the good things to come, he entered through the greater and more perfect tabernacle, not made with hands, that is to say, not of this creation; and not through the blood of goats and calves, but through his own blood, He entered the holy place once for all, having obtained eternal redemption.” Verses 13-14 say, “For if the blood of goats and bulls and the ashes of a heifer sprinkling those who have been defiled sanctified for the cleansing of the flesh, how much more will the blood of Christ, who through the eternal spirit offered himself without blemish to God, cleanse your conscience from dead works to serve the living God?”

Is that an amazing picture? There was only one sufficient sacrifice, and it was not the blood of any animals. That’s what we celebrate today in the ordinance of communion. As we partake of a small vile, in essence, just a few drops of juice, of wine, we remember what Christ has done on our behalf, with blood so pure. The sacrifice was so great that Christ was able to offer to us an absolute remediation of our sins, and place us in right standing before God the father.

We remember the vast amounts of blood spilled over the many years for the temporary restoration of relationship with God. To think about that enormous amount of blood is astounding, and yet it pales in significance to the purity of the blood which flowed from the veins of Christ.

Reading from Hebrews chapter 9:15, “for this reason, He is the mediator of a new covenant, so that, since a death has taken place for the redemption of the transgressions that were committed under the first covenant, those who have been called may receive the promise of eternal inheritance.”

That blood, the blood of Christ was the currency, the only currency that would be accepted for the payment of our sin in order to offer to us eternal redemption and an eternal inheritance.

As you remember the Lord’s death, as we break the bread, and as we taste of the bread, remember the price that was paid on our behalf as we thank God for what He has done, take, eat, and praise God that the price was paid in full.

And also, enjoy the cup that inaugurated to us that open door of redemption should we choose to walk through. Let us thank God for the blood of Christ.

“What can take away my sin?”

“Nothing but the blood of Jesus!”

Lord, in this culture, we cannot really fathom that amount of blood and yet when it is visualized in Hollywood or in our culture, it is just as a result of sin and mindlessness and hatred. But Lord, that blood that was shed on our behalf was the greatest act of grace that you have extended to us. We thank you Lord, for allowing us to reflect on that even for these few moments. But more than that, we thank you that as you have drawn us to yourself, you have built the bridge through Christ and His blood that we might enter into eternal redemption. We thank you for the blessings that are ours in the heavenly places, and we thank you for the inheritance that awaits, which we taste of even briefly now. We thank you Lord, in Jesus’ name. Amen.