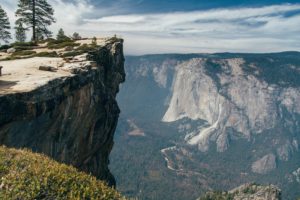 I have been pondering this week a couple of things which are incomprehensible to the fallen human mind. Number 1, the righteousness required to stand before a holy and pure Sovereign God; and Number 2, the vast devastation brought upon God’s creation because of sin, which produces the infinite divide between God and His perfect creation, man.

How often do we minimize that distance? How often do we think that Christ only had to give us a little help? When we lessen that distance, and devastation…we undervalue the divide Christ crossed in order to make a way for us to be reconciled to God.

Made in the image of God (Genesis 1:26-27) and given a mere one prohibition in the Garden, we (mankind) chose poorly and were subsequently cast out of the Garden (Genesis 3:22-24), out through an eastern gate protected by multiple cherubim with flaming swords. Our errant tendency is often to minimize that distance that sin caused between God and man. We may simply assert, God is only on the other side of that wall of flaming ninja swords, but we should know better; the divide is incalculable and incomprehensible.

As Scripture subsequently reveals, mankind would continue to degenerate, Genesis 6:5 says, “Then the LORD saw that the wickedness of man was great on the earth, and that every intent of the thoughts of his heart was only evil continually. The LORD was sorry that He had made man on the earth, and He was grieved in His heart.” Judges 21:25 adds, “In those days there was no king in Israel; everyone did what was right in his own eyes.”

The Old Testament would continue to indict the decadent nature of man; the divide was infinitely apparent, and would remain, absent an intervention from a merciful God.

Our depraved lot is sorely identified in the simple, yet stark words of Paul in Ephesians 2:1, “And you were dead in your trespasses and sins.” The status is accurately diagnosed by Paul; humans are in a perpetual state of “deadness.” That means that we cannot do anything of our own merits to find a way out. We could not initiate our own salvation. And we were lost until a benevolent Sovereign determined to issue a way out. Yes, Paul is addressing the Ephesians specifically, but by extension this depraved state and future falls to the lot of mankind as well. The only fate merited is that of eternal separation from God.

Fortunately, for us, believers, the reality of deadness is referred to here in the past tense; Paul describes the journey we were on, and again by extension the journey all of mankind pursues. “In which you formerly walked according to the course of this world, according to the prince of the power of the air, of the spirit that is now working in the sons of disobedience. Among them we too all formerly lived in the lusts of our flesh, indulging the desires of the flesh and of the mind, and were by nature children of wrath, even as the rest” (Ephesians 2:2-3).

The wide road leading to destruction is painted here, the road filled with those walking under the influence of the dark prince of Hell. Those serving to excite their own minds and flesh who stand under the impending wrath of God. Every one of us has navigated that darkened road. So, do we get it then? Do we understand that the distance between God and man is great; the chasm of sin and death is insurmountable…that is unless, God intercedes.

Ephesians 2:4 begins, “But God.” What amazing words turn the course of doom! “But God.” These two words are the fulcrum upon which the destiny of man swings upward to life. “But God!” But God so loved the world that He intervened. But God was not willing that any should perish.  But God so loved the world that He offered a plan for this fallen man to be reconciled to Him. But God had this plan from before the foundations of the world. “But God” simply means that God, and only God was able to divert this river of death, toward life.

“But God, being rich in mercy, because of His great love with which He loved us, even when we were dead in our transgressions, made us alive together with Christ (by grace you have been saved), and raised us up with Him, and seated us with Him in the heavenly places in Christ Jesus, so that in the ages to come He might show the surpassing riches of His grace in kindness toward us in Christ Jesus” (Ephesians 2:4-7).

The contrast between death and life is given, and a reminder of the effects of God’s grace, resulting in a new identity of life in Christ; and He will continue to pour out His grace of redemption upon us for eternity.

The incomprehensible divide, spanned only by the gift of Jesus Christ. One Source. One solution to the problem of sin. One bridge–Christ! The infinite divide is only able to be bridged by an infinite God.

He crossed the divide!

Thanks be to God for His indescribable gift!