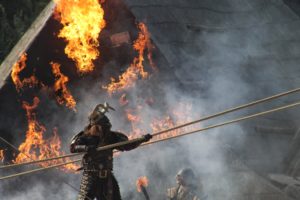 Scandinavians, my people, were indeed a brutal lot who as a world power took to the global stage near the end of the eighth century. We went a-Viking!–horned helmets, and all (well, that part of the legend turns out to be a myth). But we did set out to see and conquer all of civilization. Some would say we were superior in our skills of navigation and negotiation, however any way you look at it we were brutes. Yes, we excelled in superior navigation of the seas in our long ships, and yes, our skills of metallurgy in weaponry were unsurpassed in the day, but we were a godless consortium of brutes; pagan, cultic brutes.

Providentially. Thankfully, our reign of bloody force would endure for a relatively short 3 centuries of impressing our footprints in global terror. The sum total of Norsemen, as we were called, would be a mere million in a world population of 300 plus million, and yet, would strike unbridled dread until yielding to the next heir apparent of world dominance.

Unlike other cultures, we would not concede, we would not surrender to another earthly suppressor. We would only bow the knee to the Divine; this invincible people, my people, would willingly be vanquished by the Spirit of God. Christianity, the Gospel was introduced and embraced in the 12th century. It was in our devotion to Christ that we could no longer reconcile our “negotiation techniques” with that of lives conceded to Christ. In light of submission to Christ world dominion is not all it’s cracked up to be.

Still, our fierce legacy carries on; and though a thousand years have passed, and the nations of my people have lessened in their zeal toward Christ (and that is an understatement), I do pray we would not let go of Christ, but once again bow the knee to our true Sovereign.

And then, there’s me. My friend tells me that my diminutive stature betrays my Viking persona. True, the physical prowess has diminished somewhat over the course of a millennium, yet, I remain deeply genetically connected to these people…my people–I cannot get away from that. In the grander scheme of things my tribal identification is only incidental, though the common human depravity courses through my DNA.

I, myself, have had my own time of brutish rebellion and desire for world dominance, well at least over my own life. It was not pretty, and I sought only to satisfy my own desires. I thank God that the major rebellion was only for a season (though too long of a season for sure).

Providentially. Thankfully, I too in the tradition of my people bowed the knee to Christ. And though I struggle to keep Him foremost in my life, my calling is to serve Him.  The imagery is not lost to me…Lost to found. “Pagan” to believer. Dark to light. Death to new life. Rebel to follower. Viking to Pastor. And each of us who has responded to the call of Christ has this similar history–from rebellious soul to willing child and servant of God.

I love my heritage–I do. And all of us have rich histories, which should be celebrated…in part. Many of our foods and words, cultures and traditions are amazing–though we Norsemen do likely at some point need to apologize for lutefisk. More than that, we owe a world of apology for the many travesties we have committed. Most nations, if not all would be in a similar camp–we are brutes in what we have foisted upon others. Our worldly heritage is not always boastworthy. Our new life in Christ, however, is. Always!

We are in good company, after the likes of the Apostle Paul. In the book of Galatians after a long recitation of his religious pedigree, and his excellence in that heritage in the imposition of his zeal, he recounts the one person who needed to “die” in his life–Paul.  A Hebrew of Hebrews, and he was proud of that ancestry. He calls it, “my former manner of life in Judaism”. Yeah, it was! After persecuting believers, after persecuting Christ Himself; it was Paul who needed surrender. Paul was a bully; he was a brute.

He writes of this willful surrender in Galatians 2:20, “I have been crucified with Christ; and it is no longer I who live, but Christ lives in me; and the life which I now live in the flesh I live by faith in the Son of God, who loved me and gave Himself up for me.”

Paul’s heritage “earned” him nothing, in fact, in only brought him condemnation. But he yielded to new life in Christ.

We are not held captive to the sins of our forefathers. No matter what our DNA of broken depravity, we all have the choice to lay down arms before our true Sovereign. To live in Him and for Him.

From who we were, to who we are in Christ, we thank you Lord.