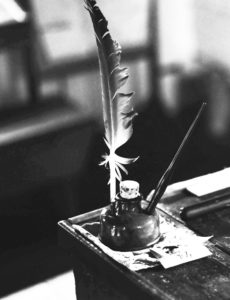 Nowhere, is he more at the level of perfection than in the first verses of 2 Corinthians 3. The metaphor is the simple vision of quill and paper, upon which a letter is penned. Paul defines his mission as stewarding letters.

“Are we beginning to commend ourselves again? Or do we need, as some, letters of commendation to you or from you? You are our letter, written in our hearts, known and read by all men; being manifested that you are a letter of Christ, cared for by us, written not with ink but with the Spirit of the living God, not on tablets of stone but on tablets of human hearts”(2 Corinthians 3:1-3).

Some felt that Paul still owed them some measure of validation of his apostolic calling–proof that the hand of God was upon him. They desired tangible evidences of his ministry! Paul had led them to Christ, founded their church, and had continued to foster growth in their spiritual walks.

Paul communicates they had to look no further than their own lives for commendations of his ministry. To Paul, those in Corinth whose hearts had been written upon bear the witness of the Divine; they have become living epistles, living letters of truth as testimonies to the world, and thus, validating the ministry of Paul.

These “letters” were the fruit of Paul’s efforts to communicate the transformational presence of Christ in a person’s life. In that these letters were observed, or read by people, these “epistles” communicated the presence of God which they could enjoy as well.

In reality though, the credit of authorship is ascribed to Christ; Paul was simply the “mailman” so to speak who was caring for the delivery of such correspondence. Christ is, was, and always will be the author of such transformation in any person’s heart. Christ is the Author of such amazing grace who continues doing such a good work in those whom He has called.

The metaphor indelibly prints this picture upon our minds. It is not a mere quill and paper, but the tablet written upon is the heart of the person, the essence of being, the very soul of any given individual. Even better than that, the ink employed is the Spirit of the living God–Wow! Let that soak in! Christ works in conjunction with the Holy Spirit to scribe such great missives.

How had Christ written upon their hearts? Buy delivering them. Healing them of hurts. Rescuing them from their sinful ways. And giving them such a sure and certain hope for the future. These letters affirm God’s grace upon each one. Maturing Christians are the true credentials of a healthy ministry.

God is the supreme author of life and has allowed the powerful testimony of your life to be witnessed by all people. You are a letter to be read by the world for the glory of Christ.

“You are the light of the world. A city set on a hill cannot be hidden; nor does anyone light a lamp and put it under a basket, but on the lampstand, and it gives light to all who are in the house. Let your light shine before men in such a way that they may see your good works, and glorify your Father who is in heaven” (Matthew 5:14-16).