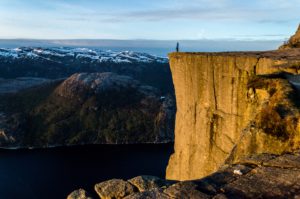 Much concern has been drawing the attention and ire of politicians and the American public in recent weeks – it is the fiscal cliff. It is the very possible prospect of “not being able to pay our bills” and recognizing that on a national level (Can you say, “Hello austerity measures and the European economy?”). The implication is that once we go over the edge there is no point of return. We sail to the bottom only to be dashed on the rocky landscape of failure below.

While this looming scenario is dire, it is only one of the threats to our society, as we know it. We have seen an unprecedented erosion of ethics, economics, spirituality, accountability and financial responsibility in recent years. It has been a mad dash to see who could bankrupt their cache of inalienable rights the fastest as though insolvency, economic or otherwise was the noble ideal.

Perhaps, the one I see as the most daunting, yet clearly minimalized, is our moral decay. The moral fortitude of this country when we began is a far cry from the picture we face now, and no doubt would be unrecognizable to the founders of this country. Yet for hundreds of years now we have been gleefully plunging into the dark abyss of moral corrosion and self-absorption.

We went over the “moral” cliff long ago and have been in freefall for centuries. If any given behavior was wrong thirty years ago, then it is still wrong. There is not a sliding scale that ebbs and flows according to the whimsical morality of a waning value system. Morals do not change with time as though our nation’s values expired or went through a time of obsolescence.

Yet we continue our downward spiral, smacking against protruding rocks and crashing through jutting branches toward our appointment with a rapidly approaching and abrupt “stop.”

If you’re still reading this sobering indictment, more power too ya; it is dismal. Here’s where we turn the corner. Can we change? Maybe, maybe not. Is there any hope? Yes, there is always hope when God is involved.

I think of the Biblical story of Jonah. God had decided to judge the land of Nineveh because of their evil. Jonah was an unwilling, yet obedient agent sent to communicate the impending doom upon the land. The Ninevites repented and turned from their abominable acts.

Jonah 3:5-6 says, “Then the people of Nineveh believed in God; and they called a fast and put on sackcloth from the greatest to the least of them. When the word reached the king of Nineveh, he arose from his throne, laid aside his robe from him, covered himself with sackcloth and sat on the ashes.” As a result the Lord relented from the calamity, which He was about to send.

Is it even conceivable for a nation to radically change direction in this day and age? Yes. President Yoweri Museveni celebrated Uganda’s 50th anniversary of independence a few years back, calling for national repentance from sins, including his own. “Forgive us of sins of pride, tribalism and sectarianism; sins of laziness, indifference and irresponsibility; sins of corruption and bribery that have eroded our national resources; sins of sexual immorality, drunkenness and debauchery; sins of unforgiveness, bitterness, hatred and revenge; sins of injustice, oppression and exploitation; sins of rebellion, insubordination, strife and conflict.” Shades of Daniel 9 for sure. Pretty well covers it I would say, and pretty well identifies our sins as well.

I can’t help but believe that God will honor these requests if they are embraced by the nation. From my fencepost the answer is simple. Turn back to God, the God of the Bible and everything else will work itself out. Will it take time? You bet. We have built up quite a lot of momentum heading in the wrong direction, but God is a rewarder of those who seek Him.