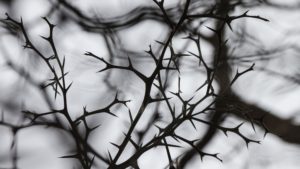 I hate thorns. I hate thistles. I have never liked or appreciated them. And, when they hurt me, I do find a certain amount of adolescent enjoyment condemning them to a flame when afforded the opportunity. I don’t know if I have ever observed anything about a theology of thorns and thistles though there may well be. Originally absent from the event of creation in the Garden, they were an introduced consequence to the sin of man; but where did they come from? Did God introduce something “Not good” after producing only good and order from His spoken word? Or, were they contrived by an outside agency?

Just to remind us of the indictment after the Fall, God said to Adam:
“Cursed is the ground because of you;
In toil you will eat of it
All the days of your life.
Both thorns and thistles it shall grow for you;
And you will eat the plants of the field” (Genesis 3:17b-18).

I would first suggest that the one who contorted these little organic nuisances was Satan himself, and that “thorns and thistles” are those areas over which God has yielded some authority to Satan, after all, he is prince over this earth. Now, Satan did not (does not) have creative license to create something out of nothing (ex nihilo) as does God, but apparently, he does have ability to deform something which was declared good.

What we do see initially is that this agricultural menace was to torment those who would work the earth. In other words, the advocacy of the earth to produce sustenance would be hindered. After the Fall, the earth would still yield fruit, but at greater cost, time, and effort to the individual. So, is this curse of the ground relegated to only those who toil in the soil? I propose that it does not.

We would be foolish to think that, as a result of sin, only agribusinesses were affected by “thorns and thistles.” I would rather suggest that thorns and thistles are any hindrance in any line of work in which Satan desires to frustrate, confound, confuse, or discourage us. Satan introduces chaos wherever possible to frustrate people, or to the greater extreme, challenge their faith. He is in agriculture. He is in the business world. He is in technology. He is in automotive repair. He seeks to disrupt communication. He is in construction. Boy! Is he in construction! And where he gets me most is in cords, all kinds of cords. He frustrates me each time I deal with cords. Computer cords. Headphone cords. Extension cords. They tie themselves up in knots, and catch on every snare possible. Those irritations affect my vocal chords! Well, let’s just say that sometimes…I bubble over.

Though seemingly innocuous, these impositions are more than simple irritations, they are part of the corpus of schemes of Satan – the methodology, or system to introduce chaos into God’s good order, and into the lives of men. Just one of the little ways in which the Adversary is seeking to assault our spirit. Though work is deemed good before the Fall, it is still good, but now it becomes an agency through which we can be tempted…to…react…poorly.

And, Satan uses thorns to choke-out growth of the Gospel in the hearts of people (Luke 8:7, 14). Am I saying that Satan is under every rock, and responsible for every evil in the world? No, I am not saying that! Mankind cannot get off the hook that easy. But, he is lord of the thorns. How would that look on his tax return?

Some may contend this “theology” is a little fanciful, and they may be right…somewhat… but if what I say is correct then it falls in line with Satan being given authority to spew evil into our lives, to mess with us, to taunt us, to annoy us (And sssnicker?) If I am indeed wrong then somebody needs to explain why such a prominent role the thorns and thistles play in the Edenic indictment.

How interesting it is that the soldiers surrounding Jesus at His impending death would shove a crown of thorns upon His brow (John 19:2), a brutal reminder of the curse placed upon the ground for the sin of man…What would compel anyone to do such a thing is beyond me, even at the level of evil demonstrated by the Roman guards. However, it was yet another affirmation that Christ, on the Cross, would bear the consequences of the curse–all the consequences of the curse. And, He would be victorious!

I can’t get the image out of my mind about the lion with a thorn in his paw; it reduced him to begging a mouse for relief. Not to say that we are lions, or that God is to be equated to a mouse. My point is that sometimes we need relief from an outside agency-notably divine assistance from these diabolical denizens, just to make it through the thorns of life. Each time we get attacked by one of these little agents of Satan, we are reminded of the curse upon Creation. But, they are temporary. Yes, Satan is prince of this world, but his days are numbered. There will be no thorns, and no thistles in Heaven.