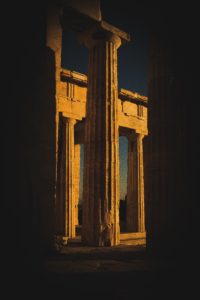 The character of the Church is always on display!

In the midst of a letter of instruction and encouragement to his young protégé, Timothy, Paul issues a very beautiful reminder of what the Church is, how we find ourselves there, and our mission as a Body of believers.

“I am writing these things to you, hoping to come to you before long; but in case I am delayed, I write so that you will know how one ought to conduct himself in the household of God, which is the church of the living God, the pillar and support of the truth” (1 Timothy 3:14-15).

The Church itself is the household of God, where the elect, those who have been called, house the divine.

Who we are. How we were placed there. And our purpose…

In 1 Timothy 3:15, communicates our function asthe household of God. He references a pillar.  What’s a pillar? Well, a pillar is something upon which something rests. Paul is speaking in a metaphor here. What is the metaphor? What is the pillar of what he speaks? It’s the Church of Jesus Christ. It is the corporate church. It is the universal church. Paul says our mission, the mission of all the other Christian churches in town and across the world… our mission is to be a pillar and support of the truth. A support is something which sustains, that holds up. A pillar is something that exalts and holds high the truth. The household of God is commended to be the custodian of truth– the pillar and support of truth.

If you looked at some of the pictures of pillars in antiquity, you see that they’re often made up of many stones. They’re stacked one upon each other and they’re tapered down. As they climb taller and taller, they become more and more slender. The craftsmanship of those pillars was extraordinary, and oftentimes you couldn’t stick a piece of paper between each stone because the joint was so smooth. It was honed because of the craftsmanship. Peter speaks of these kinds of stones–worked stones. We are the household of the living God. We are living stones in the household of God. Beautiful imagery of a pillar that is going high into the sky, and upon that pillar is truth.

Paul is writing to the Ephesians, people that live in Ephesus, and just outside of town, there is a temple; it is a temple that was dedicated to the goddess Diana. It was a massive temple, 1.6 times larger than a modern football field. Think about how big that is. There were 127 columns utilized to suspend that temple, but you know what was perched on top of those pillars?

These people had a clear visual of what Paul was communicating. Over time, all of those pillars in the temple of Diana came down, all except for one which still stands. Two of those 127 pillars were taken from that temple and used to construct another building that was called the Hagia Sophia–the sacred wisdom, sacred truth; it was used as a cathedral to God, and then subsequently taken over by Muslims and once again, held lies on top of those pillars. It’s now a museum with those two pillars still standing, offering little more than architectural wonder.

The Church of Jesus Christ is the column where truth is held. It has been conferred by God, and we have the privilege of communicating this to each other, and to the world around us. The Church then is the holder of truth. Other religions are lies. Do I dare say that in the kind of politically correct world we live in? All other religions are lies? Sounds a little bit exclusive, Kelly. Well, it is very exclusive. There’s only one way under Heaven, one name under Heaven by which men can be saved, and that is through the name of Jesus Christ, through the blood of Jesus Christ. Do you understand how important it is that as we are on display, and our character is on display, that we are abiding in Christ?

Other religions get some stuff right sometimes, but how often is something just a little bit wrong? They leave something essential out. Maybe it’s the deity of Christ. Maybe it’s the correct understanding the depravity of mankind. Maybe it’s the idea of an eternal Hell or consequence or punishment for sin, or the truth of one true God, and only one God, and the love that He has for the world. When you leave one piece of God’s truth out, somebody gets left behind. We should feel a little bit of a burden as we are the supporting agency, and we are responsible for transmitting truth to the world.

Or, maybe even the Social Gospel. How many churches have we seen just die because they placed the Social Gospel as something of greater importance than the gospel of Jesus Christ that saves people from their sin? If we offer someone a cup of cold water, or a meal without taking the opportunity to introduce them to their Creator and how they can be set right with Him, then we’re just giving them a cup of water. Is it bad? No, it’s not bad, but getting them that cup of water might be an opportunity that you would be granted an audience to listen to the love that God has for them. How often are good works paraded on top of the pillar? How often do we put accomplishments up there instead of the truth? How often do we put a cultural event or an aspiration? The truth that rests upon the pillar of the household of God is not a program. It’s not the newest most popular book. It’s the truth of salvation found only by faith in the finished work of Christ.

We are on display, Church…