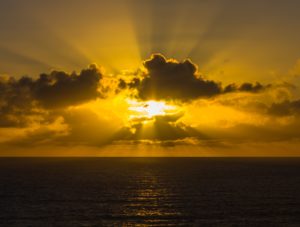 In 1 Timothy 3:15, Paul addresses the Church as “the pillar and support of the truth.” The pillar raises high, and the support upholds the certain treasure of truth; the question must be asked, “What is that truth which is resting on top?” May I suggest that it is the singular greatest “creed” that we could embrace regarding the work and person of Christ? Like a beautiful ring housing a pearl of great price, the Church is commended to be the assigned steward of this truth; Paul communicates this great creed in verse 16.

Paul returns to that body, that corpus of knowledge of truth which is resting upon the Church, and supported by the Church. He doesn’t just assert that the Church is a pillar with truth on top, but here, he affirms that truth as the magnitude of the person and the work of Jesus Christ. Paul, by the inspiration of the Holy Spirit, gives us a beautiful Christology, a beautiful array of Christological affirmations. It is a confession. It is a statement of faith, and this one is inspired by the Holy Spirit of God to be in Scripture. It is a creedal statement that unites all true believers, it is that which binds us together, and it is a reminder of what is to remain on top of the pillar.

The Creed:
“By common confession, great is the mystery of godliness. He who was revealed in the flesh was vindicated in the Spirit, seen by angels, proclaimed among the nations, believed on in the world and taken up in glory.”

I think it is the unfathomability that God would love me. There is a mystery there, why an all-perfect, all holy God would reach down to broken mankind. There is a mystery. Why would God do that for me? I am low. He is high. What would cause an almighty God to do that? And that’s a mystery, but a mystery answered in Christ. If we could even fathom our total depravity and how offensive our sin is before God, we would be humbled by the fact that God loves us more than any sin we’ve ever performed.

He loved us so much that He sent His Son. What kind of a God does that? One who so loves His creation. He desires to restore this broken creation to the original blueprint–such is the mystery of godliness. The plan of redemption of God required that Jesus become like us. God accomplished that as He sent Christ. Paul, in verse 16, gives the shortest account of the Gospel and speaks to the entire redemptive work of Jesus Christ as Savior. You want to memorize a good verse this week? First, Timothy 3:16 is a good candidate–it’s the life of Christ; it’s the purpose of Christ. It affirms the Deity of Christ.

“He who was revealed in the flesh.” I hope you see the incarnation here. At some point–the fullness of time, Jesus Christ is introduced into His creation. John 1 confirms this: “In the beginning was the Word, and the Word was with God, and the Word was God” (John 1:1). Verse 14 says, “And the word became flesh and dwelt among us.” People looked upon Christ and saw God. It’s the idea of Christmas. Yes, it’s the idea of flesh and bone God. It is the hundred percent man, hundred percent God. It’s a demonstration of God’s love to His creation.

“He who was revealed in the flesh, was vindicated in the Spirit.” Such brief words that I believe speak to the sacrifice, the quality of Christ, the obedience of Christ, the innocence of Christ, the Lamb of God who takes away the sin of the world. It speaks to the affirmation of God upon His Christ, His anointed One, from the baptism, to the scourging, to being nailed upon the altar of the cross, to bleeding, to death, and the atonement as the blood of Christ is offered up in the Holy of Holies, and to His resurrection; He truly was justified in the Spirit.

We praise God. We thank God the work of Christ was acceptable. Christ was purposed to redeem the fallen elect, and there was one way to do that. Christ says, “Into your hands, I commit My Spirit” (Luke 23:46). His work was justification for my sin. For your sin. He who was revealed in the flesh was vindicated in the Spirit and seen by angels. Could be that he’s talking about this work of Christ being observed by angels? Amazing! The angels were clued into some wonders taking place.

Peter talks about these angels observing the whole plan of redemption was taking place. It had been announced.  It was put into place. It had been decided before the foundation of the world, but the idea, the understanding of what was to be given to man had been long-prophesied in the Garden in Genesis 3:15. The seed of the woman would bruise Satan. Peter speaks to this salvation, “The prophets who prophesied of the grace that would come to you made careful searches and inquiries.” The prophets are trying to figure out how this redemption is going to take place, how God is going to redeem the fallen.

Peter continues, “seeking to know what person or time the Spirit of Christ within them was indicating as He predicted the sufferings of Christ and the glories to follow. It was revealed to them that they were not serving themselves, but you, in these things which have, which now have been announced to you through those who preached the Gospel to you by the Holy Spirit sent from Heaven­–things into which angels long to look” (1 Peter 1:10-12).

These angels we’re witnessing God’s plan of redemption unveiled. They seemed privy to the plan of redemption to some degree, but it says “things into which angels long to look.” The writing seems to describe their anticipation. “When’s redemption going to happen? Is it now? Is it happening now?!” The terminology paints the picture of angels leaning forward, overflowing with anticipation. They’re excited about how redemption is going to take place, and they’re watching this. They have a front row seat if you will, and they want to turn to the last page of the book. Paul simply says, Christ is seen by angels, but there was an audience in the spiritual realm that was observing–Angels. Privileged to see the plan of redemption unfold.

Paul says, “He’s proclaimed among the nations.” That is the simple gospel call going forth. It is the evangelistic efforts that are conducted through the Church to get people to hear the good news. Paul announces, “He is believed on in the world.” That’s the fruit of redemption.

That is what Christ came to bear–the fruit of reconciliation, redemption, restoration; “believed on in the world” is the response of the elect. Again, as the Spirit is convicting the world in regards to sin and righteousness and judgment, the soil of the heart is prepared. And the Gospel goes forth, and it finds purchase in the soil of the heart. It germinates, and there is regeneration or new life that takes place in the heart of that individual. Paul finishes this creed. He says that Christ is “taken up in glory.” Christ receives back the glory that was His before the world began (John 17:5). Such few words describe the coronation of Christ to His deserved place of glory at the right hand of the Father.

He who was revealed in the flesh,
Was vindicated in the Spirit,
Seen by angels,
Proclaimed among the nations,
Believed on in the world,
Taken up in glory.

That is my Christ. That is your Christ.

These words are the dividing line of humanity. Every single person will land on one side of this confession or the other. No programs, no books, no news, or service will preempt the value of this creed, of this work of Jesus Christ.

It’s one of the most beautiful of Christological creeds, affirming who Christ is, and what He has done for our benefit. If you have placed your faith in Christ and in His finished work, if you embrace the truth of these words, He is your Christ.