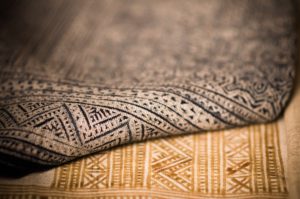 It has never failed to amaze me when I happen across a display of tapestries. One cannot help but appreciate the intricate patterns, the interplay of rich colors against the fields of texture, and attention to detail in the many-colored threads of expression – elaborate creations from the mind of a grand weaver. I have to stop and think of the forethought and the commitment of such a magnificent and special mind that can create such a captivating treasure.

Beginning with one thread, one color, one row followed successively by more threads of different colors and locations. With every additional thread the pattern becomes more full, more vibrant, more depicting of what the grand weaver desired. The more threads added, the more beautiful it becomes until it is pronounced finished. From above it is the masterpiece of the creator, yet from the back it is quite another story.

Have you ever looked at the backside of a seemingly flawless tapestry? It is an absolute quagmire of loose threads, rogue knots and indistinguishable patterns resembling nothing of the other side.

I cannot help but see this metaphor as a perfect parallel to the Church. Scripture has referred to the Church in many parallels: living stones, the human body, a royal priesthood, and the bride of Christ, but I think the Tapestry is a particularly telling demonstration of the process of the people of God. This kind of masterpiece, I believe, is referenced in Ephesians 2:10, “For we are His workmanship, created in Christ Jesus for good works, which God prepared beforehand so that we would walk in them.” Did you catch that? We are the workmanship of God, the remarkable handiwork of the Grand Weaver. He is engaged in the project of making His perfect masterpiece- the masterpiece of the Church- those whom He redeemed through Christ.

Can you imagine the most brilliant, magnificent tapestry? Breathtaking. That’s what Paul is talking about. Paul is saying that we are the great masterpiece that God is in the process of making. What’s so great about it? He is taking people of such diverse backgrounds and qualities, in this specific case it is Jews and Gentiles, and He is weaving them into a fantastic one-of-a-kind work of ultimate superiority.

“But wait!” you may say, “from where I’m standing the Church looks like a messed up train-wreck of individuals.” That’s what makes this metaphor so fitting. Most of us are looking at the Tapestry from the backside, and the truth is, it is not all that beautiful. Threads, are all over the place, doing their own things, abruptly cut…and knots galore. But the key is that God is not finished yet, and more importantly, God looks at the Tapestry from the other side.

When He looks at His creation, I am sure He sees it as already finished. He sees this project of people, this great assembly of His saints as His redeemed. He sees His chosen perfectly sanctified through the blood of Christ. He sees us as perfect and what we will be when He is finished. He sees the finished work of art preciously displayed in eternity.

God is the Grand Weaver who is so committed to this endeavor that He sent His Son to make it happen. Ephesians 2:8-9, the preceding verses, tell us this masterpiece of redemption is His doing, no one else’s. “For by grace you have been saved through faith; and that not of yourselves, it is the gift of God; not as a result of works, so that no one may boast.” We are merely threads in the Master’s hands. And yet, what a privilege to actually be a minute part of the Tapestry of God!

What a blessing to be woven-in to the fabric and the tapestry of the eternally redeemed.