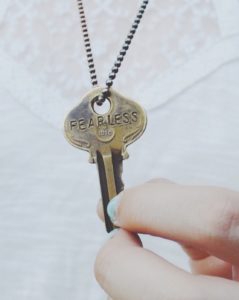 Somewhere stuffed in the recesses of my closet is wad of keys dangling at the end of a brightly colored key fob. I see it every now and again, and am reminded of the hectic pace at which we do life. The keys are many, and of many sizes, shapes, and colors. Some are rusty, some shiny. Some have names on them; some have numbers – all reminders of days gone by. Pretty much all different, but what unifies them is that they are for the most part unidentifiable; I don’t know what they go to. Keys are given, or identify authority over some area; all of them used to unlock, activate, or grant access…to something.

Somewhere over the course of time, they have lost their identity. There is a lock out there…somewhere, but the answer is now unknown to me, and seemingly lost to time. With each passing year this mass of potential continues to grow, after all, the key is valuable, right? And you can’t just throw them away. Who knows? I just may come across some desperate lock that may be able to be heroically released due to the meticulous stewardship of my cache of keys.

My guess is that most of us have something like this around our houses, whether it is in a little bowl in the dining room hutch, or a cup in a dresser drawer, or a upon a nail in the work bench area. These keys, which held operational value in earlier days, have become muted and relegated to this group of orphans.

In reality these keys have no practical value or influence on our everyday lives.

Let me draw a theological parallel here. Luke 19:12-27 introduces slave who has been entrusted with a key, well, it is actually a mina, a unit of money. If I understand this parable correctly, he is a follower although to a minimal degree. The account goes like this.

“A nobleman went into a far country to receive for himself a kingdom and then return. Calling ten of his servants, he gave them ten minas, and said to them, ‘Engage in business until I come.’ But his citizens hated him and sent a delegation after him, saying, ‘We do not want this man to reign over us.’ When he returned, having received the kingdom, he ordered these servants to whom he had given the money to be called to him, that he might know what they had gained by doing business. The first came before him, saying, ‘Lord, your mina has made ten minas more.’ And he said to him, ‘Well done, good servant! Because you have been faithful in a very little, you shall have authority over ten cities.’ And the second came, saying, ‘Lord, your mina has made five minas.’ And he said to him, ‘And you are to be over five cities.’ Then another came, saying, ‘Lord, here is your mina, which I kept laid away in a handkerchief; for I was afraid of you, because you are a severe man. You take what you did not deposit, and reap what you did not sow.’ He said to him, ‘I will condemn you with your own words, you wicked servant! You knew that I was a severe man, taking what I did not deposit and reaping what I did not sow? Why then did you not put my money in the bank, and at my coming I might have collected it with interest?’ And he said to those who stood by, ‘Take the mina from him, and give it to the one who has the ten minas.’ And they said to him, ‘Lord, he has ten minas!’ ‘I tell you that to everyone who has, more will be given, but from the one who has not, even what he has will be taken away. But as for these enemies of mine, who did not want me to reign over them, bring them here and slaughter them before me.’”

The parable identifies a nobleman (thought to be Jesus) who is going away and entrusts the continued work of the kingdom to his stewards. A couple of them do well to faithfully execute the charge with fruitful fidelity; the last guy has accepted his charge with the least of urgency.

Now, it’s difficult to pinpoint just exactly what this mina is, but I believe it represents some measure of spiritual grace, and incorporates some component of the Gospel; he has accepted this measure of grace, and is expected to be a good steward of its use, although he chooses to stuff it away. This slave has been selected to be a privileged steward. In the end, at the time of reckoning, at the return of the nobleman, he will fumble for this neglected “key” as if to say, “Um. Does this work?” His life has demonstrated little faithfulness, but God’s faithfulness, and the blood of Christ to redeem is so great, he will be granted entrance to the Kingdom, but only by the skin of his teeth.

Sadly, this person displays minimal faithfulness to Christ, I also believe he represents a subset of people in the church today. He represents people now living who, if hard pressed, may confess Christ, as somewhere in a time long ago they nodded acceptance of Him. Yet, the fruit of the person’s “faith” ceased at salvation; admittance into the Kingdom of God, but no more rewards. Like the slave with one mina their faith has not been evident in their everyday lives, but they will attempt to use it in the Day of Judgment.

Some would press the issue that this guy actually would not be granted the Kingdom of Heaven whatsoever, and I must confess that a good argument could be made in that respect. After all, Christ does call him, “a wicked servant.” I for one choose to stand in a little more certainty of my eternity, and be more intentional and faithful in my demonstration of faith, like the other two servants. Mind you it is not the works which will save, but it is the faithful administration of those gifts which affirm the faith within.

Make no mistake about it, we will be held accountable. “For we must all appear before the judgment seat of Christ, so that each one may be recompensed for his deeds in the body, according to what he has done, whether good or bad” (2 Corinthians 5:10).

Walking with Jesus is not a matter of convenience; it is an issue of being right with God. The “key” to the entrance of Heaven is through the blood of Christ. After that, we are called to obedience to the glory of the Lord our King.

Let the “Amen” sound from His people again!