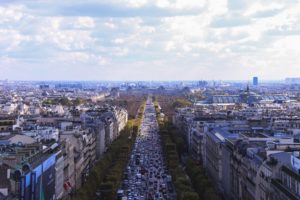 Most of us if pressed could identify our worst day ever; it may be the dissolution of a relationship, a personal tragedy or even financial struggle. Though we may be a little hard-pressed to identify a worst-day-ever in the course of mankind, one might speculate that the worst day ever was the day that Eve sunk her teeth into that delectable fruit thus triggering the collapse of the relationship with God. One may identify the era of the black plague upon the face of the earth. Perhaps, it was the day that the bombs were dropped upon Japan, causing great loss of life. Could it be the lust for megalomaniacal power in the heart of Hitler that even precipitated such an event? One may speculate that the worst day ever was the election of a given individual, or the passage of a particular law.

All have their merits to some extent, but I would surmise that the worst day ever is yet to come. I would suggest that Jesus speaks of this day, a day of judgment, in Matthew chapter 7.

“Not everyone who says to Me, ‘Lord, Lord,’ will enter the Kingdom of Heaven, but he who does the will of My Father who is in heaven will enter. Many will say to Me on that day, ‘Lord, Lord, did we not prophesy in Your name, and in Your name cast out demons, and in Your name perform many miracles?’ And then I will declare to them, ‘I never knew you; depart from Me, You who practice lawlessness’” (Matthew 7:21-23).

These individuals who are seeking entry into the Kingdom of Heaven are referred to earlier in verse 13; these are people who have chosen the wide road to Heaven. This is the road where each individual has established his own rules of righteousness; that which is needed in their own minds to gain entry into Heaven. Yet, they proceed as though they are willing, obedient disciples of the Christ performing work on His behalf and in His power. They fully expect entry into Heaven but are ultimately denied.

They come before Christ contending acts of prophecy, exorcisms, and miracles. Christ has already maintained in the same passage that no good fruit can come from a bad tree. In other words, they were not even able to bear that kind of fruit. Therefore, the prophecy, exorcisms and miracles were delusional. In a parallel passage (Luke 13:22-28) they contend with Christ that they have eaten with him, and that He has taught in their streets. In regards to eating with Christ, they implied they had relationship with Him; which they did not, and Christ issued the same command to those in the Matthean passage, “Depart from me you evildoers.”

The implications of this passage are profound to the church. Our culture is filled with perhaps “good” people, yet still lacking in the proper sanctification. What this communicates is that there are those within the walls of the present-day church who are not regenerate, who believe they are walking the straight and narrow road to salvation when indeed they are not.

They are ignorant, deluded, or prideful. Errant doctrine. Errant Christs. Errant theological systems are where they have placed their faith; systems which in no way are able to redeem them of the consequences of their sin. Like the Pharisees, they are seeking salvation by works, or by means other than the work of Christ.

Why would I suggest that this is the ‘worst day ever’? Because this will be the worst surprise of their existence. Expecting entry into the glory of Heaven they will instead be sentenced to eternal separation from God; they are banished to hell. There is no more time to change their ways. No more second chances to choose. End of story. Over. Kaput! To those who have openly rejected the existence of Christ, or those who have rejected His mediating work, they may reluctantly accept their fate with hate and scorn as due course. But these, as they have been errantly expecting this wide road of tolerance to save them, will be sorely blind-sided by the verdict.

This sobering passage is definitely informational, as it relates horrific facts which will take place at the judgment of Christ. But more than that, this is a screaming admonition to all of us to check ourselves to see if we really are on the narrow road to Heaven. Are we truly of the household of faith, those who are redeemed solely by the blood of Christ?

We would do well to ask ourselves if we have rightly placed our trust in Christ, and Christ alone to save us. If we have, we can walk that narrow way of obedience and relationship with Christ. If we have not, there is still time to enter through the narrow gate! Choose well. Choose wisely. Choose now!