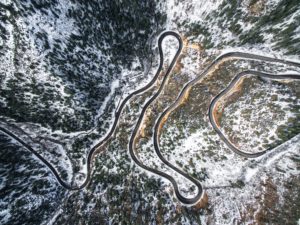 It seems like we spend generous amounts of our time and effort getting from one place to another, figuratively or otherwise. From one freeway to another. From one job to “a better” one. From one dwelling to the next. Maybe even from one emotional state to one that is more satisfying. Yet, often what inhibits us from achieving that goal is some sort of barrier that that shuts us down, so we give up. After all, if it’s “impossible” or just too hard we re-evaluate the benefits and lose motivation.

I can’t help but think of another situation where people are trying to get “from here to there.” It takes place in the book of Exodus. After being in slavery for 400-plus years the Israelites have been reminded that that they would be given a land of their own – the Promised Land, originally promised to Abraham. The only problem is that they had to breakaway from Egypt to get there.

After a radical chase, they come upon a seemingly insurmountable obstacle standing between them and their freedom; it is nothing more than a sea! As millions press in upon the unmovable, and the armies of Egypt descend upon them, their brass ring, new life itself, awaits them on the other side of that massive body of water. Yet, God opens the door. Exodus 14:21 puts it this way, “Then Moses stretched out his hand over the sea; and the LORD swept the sea back by a strong east wind all night and turned the sea into dry land, so the waters were divided.”

But the Israelites were not home free yet; there is one more thing they needed to do. They needed to walk across the Red Sea, from Point A to Point B. They needed to put feet to their faith and ambulate to the other side. The result? They didn’t need to be asked twice, but walked on through. “But the sons of Israel walked on dry land through the midst of the sea, and the waters were like a wall to them on their right hand and on their left” (Exodus 14:29). With immense waters looming on each side, the amazed Israelites traversed to safety through the open door.

How many times do we have the goal within our sights and yet we just can’t get there? And yet all that is required is that we put feet to our faith. How many times has God revealed the open door and we failed to walk through it? If you’re like me the answer is, “Plenty!”

For starters, God decided to deliver mankind from the state of slavery and certain death. Slavery to the old nature and death, eternal separation from God because of our sin. He accomplished that through the work of Christ – Christ became the bridge to lead us to the other side. So often mankind stands, at the edge of the greatest of opportunities. The only thing required is to trust in Christ and walk from darkness into the light – from one side to the other. Yet, most will not elect to do just that. Rather, we stand in the enemy’s camp awaiting certain pummeling.

Even subsequent to salvation, how often do we stand at a door already opened and ask, “What should I do?” I am not saying it is always easy to discern His direction but sometimes it is a lot more obvious than we make it out to be. I know people who know the way and yet they say, “Pray for me.” I say, “You don’t need prayer. You already know what to do. So, move ahead and be obedient.” Faith and obedience.

God took care of the impossible. God is taking care of the difficult. But we have a part to play too. In order for us to move from here to there, we need to “step it up.”