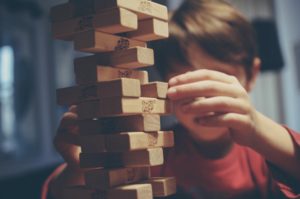 I would imagine most of us are aware of the pastime game of Jenga. The name comes from the Swahili word meaning “to build.” It is the game that begins with 54 wooden tiles that are neatly stacked in levels of three to establish a stable tower. The object of the game is for players to knock out tiles from one level and place them in ever taller and increasingly unstable levels as the game progresses. The game ceases when the actions of one of the players, through the movement of a tile, causes the tower to collapse.

Perhaps in the realm of table games, this is a winner, but it doesn’t work so well in the world of theology. All too often I see people trying to poke holes in sound theology to come up with a “modified” and weakened form of theological understanding, “something not so restrictive.” The resultant effect is a monstrosity of structure that is unstable and filled with holes.

What this looks like in a postmodern or “enlightened” world is a group of people who think they are wiser, who know better, people who think the entire body of orthodox understanding is “overkill.” Rather, they ask the question, “What is the minimum I need to ‘make it’ into the Kingdom of Heaven?  Hmmm. What are some of these crazy blocks I can knock out, or move around?” In other words, what is the least they can do gain salvation, or the most they can “get away with” and still avoid punishment? Truly a dangerous game to play! Precarious mindset, but perhaps deserving of an answer.

Well, the answer to the third question is, “you can’t get away with any more, in fact, what you have already done has made you guilty of death.” “Really?”, you say. Yes, really. Romans 3:23 says, “for all have sinned and fall short of the glory of God.” The least offense to God separates sinners from Him and His glory, and we have all done it.

What about the first question, “What is the minimum I need to ‘make it’ into the Kingdom of Heaven?” Actually, that is the wrong question to be asking, sort of like asking, “What is the least amount of air I can breathe and still live?” Well, for starters, Paul said in Romans 10:9, “that if you confess with your mouth Jesus as Lord, and believe in your heart that God raised Him from the dead, you will be saved.”  So you need to believe in Christ, that God raised Him from the dead and profess it.

Can’t I get there through another road? No. John 14:6 says, “Jesus said to him, ‘I am the way, and the truth, and the life; no one comes to the Father but through Me.’”

But honestly, that is just the beginning. Luke 9:23 informs us of the true cost of Heaven.  “And He (Jesus) was saying to them all, ‘If anyone wishes to come after Me, he must deny himself, and take up his cross daily and follow Me.’” What we need to do is surrender unconditionally to the Lordship of Christ. Daily. The “minimum” is everything! Total surrender.

Those are just a few blocks that are needed to construct a healthy tower, but they are big ones, and they are essential – every one of ‘em. All in all, a pretty important matter deserving of attention. After all, not only your life depends upon it, but your eternity.

What else is missing from your theological tower? What are you trying to chisel out of it? How long until it “Jengalistically” collapses?

Better find out. Pour yourself into God’s Word. Come to church and learn.