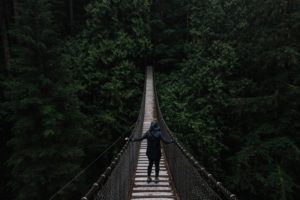 Recently, while hanging around the house on a Saturday, I had the opportunity to see the movie “Ghost.” Most of us are familiar with the plot of the film which is very “Hollywood.” What struck me that day was the heavy theology portrayed in the film. Essentially, the movie communicated that good people go “up,” and bad people go “down.” At death, tiny little stars ushered you up, or the goblins from the netherworld dragged you down. The final fate of an individual was predicated upon the deeds done while on earth. It struck me that even Hollywood has a theology, as errant as it may have been, which still pointed to an afterlife.

Many people claim to deny God or an afterlife. It strikes me as odd that when one attends a funeral of a person who lived an outright ungodly life, that words of eternal consolation are spoken. “We know that so-and-so is in a better place right now.”  Even if a person has lived a life vacant of obedience to God, people do not say, “He never believed in God, but we are comforted by the fact that he has gone to a state of nothingness.” Certainly, these are not words of truth or comfort.

The point is: people choose to deny eternity for the convenience of living their life the way they want to. If a person acknowledges the eternality of the soul, they need to acknowledge a greater being, the person of God, to which they are accountable. Yet, when all is over, mankind wants to be comforted, and it is logical to use words of comfort to ease the pain of the friends of the deceased. Sorry, you can’t have it both ways. You either believe in God and eternity, or you don’t. You don’t get a magic ticket into heaven because your relatives speak nicely of you after you’re gone. The decision needs to be made on this side of eternity.

The Bible tells us in Ecclesiastes 3:11… God has made everything beautiful for its own time. He has planted eternity in the human heart, but even so, people cannot see the whole scope of God’s work from beginning to end (New Living Translation).

Carl Sagan wrote near the end of his life, “I would love to believe that when I die I will live again, that some thinking, feeling, remembering part of me will continue. But much as I want to believe that, and despite the ancient and worldwide cultural traditions that assert an afterlife, I know of nothing to suggest that it is more than wishful thinking. The world is so exquisite with so much love and moral depth, that there is no reason to deceive ourselves with pretty stories for which there’s little good evidence. Far better it seems to me, in our vulnerability, is to look death in the eye and to be grateful every day for the brief but magnificent opportunity that life provides.”

Carl wants to believe because God had written eternity on his heart too. We may not know the extent of all of God’s plans, but we certainly know there is eternity. It’s more than “wishful thinking,” Carl. Who can he be grateful to but God for the life he has had? Unfortunately, now “billions and billions” of years is taking on a whole new understanding in the mind of Sagan, but it is too late for him to do anything about it. It seems odd that a man who could embrace “billions and billions” of years could not embrace eternity.

We all believe. You believe. You know you do! It is written on your heart. What are you fighting? It takes a lot more faith to deny God and eternity than it does to accept it. If Hollywood can have a theology, so can you.