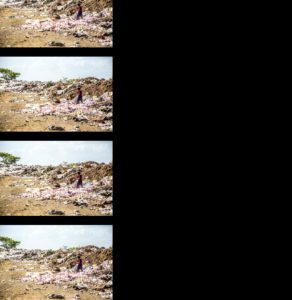 While cleaning up around the house, I found I was able to generate enough garbage to fill up my entire pick-up truck. And where else do we take a full truck of debris but to the county dump? As I approached the facility I began to see litter that lined the entrance, and I could smell the evidences of decay. There were many who waited to be granted entry as there is no shortage of people who desire to rid themselves of their garbage; big dump trucks, vehicles carrying large trash bins, pick-up trucks, and even cars stuffed with trash bags. Funny as it may seem there is a price to dispose of completely worthless items.

As I drove to the top of the man-made mountain of refuse, bulldozers were working furiously to move the garbage around, compact it, and cover it with dirt.  Amazing how much time, energy, and expense go into the process of disposing of rubbish.

I could not help but see the parallel to our sin. It has no value, so we desire to hide it, or cover it up as quickly as we can, but like garbage, it is seemingly endless. We are not proud of it, we don’t want to smell the filthy stench, or see it, we just want it to go away. And just like the production of garbage, mankind is very efficient in the production of sin, particularly in America; it is the bane of our nation. Proverbs 14:34 declares, “Righteousness exalts a nation, But sin is a disgrace to any people.”

In the Old Testament, God refused to be present with the unclean people of Israel until sacrifice had been made to “cover” their sin and allow a holy God to be in their midst; the blood of the sacrifice produced this covering. One can only imagine the repulsion that God has toward the sin of this nation. Are we exalted or are we disgraceful? Do we embrace righteousness or sin?

John the Baptist said of Christ, “Behold, the Lamb of God who takes away the sin of the world!” (John 1:29). Notice, Jesus doesn’t merely cover up sin, but He takes it away. Just like the worker who takes away our garbage from the curb every week, in some miraculous way Christ disposes of it on our behalf. One requirement is that “Trash” has to make it out to the curb; as well, we need to purposefully “Give our sin to Christ” so that He can take it away. Most of mankind however fails to even acknowledge that they have sin. Rather, they keep it stored inside till they are restrained and incapacitated by its hold upon them, just as garbage in a home.

The sin of our nation is indeed a disgrace, an abomination to the Lord. Before Christ can haul it away, we must as a nation acknowledge that it exists. But that doesn’t mean we can point an accusatory boney finger at the sum of mankind in America without first pointing it at ourselves on an individual level. One scoop at a time that mountain needs to be brought down – and that begins with you and me.

What rubbish around your “house” have you lived with so long that you do not even notice that it is among you? Maybe it’s time to identify it and take it out to the curb.

Strange as it may seem, Christ paid a high price for that garbage in your life so that you may enjoy the presence of the holy God in your life.

Ask the Lord to take it away and in its place, reconcile you to a loving God. It is a great exchange you will never regret.