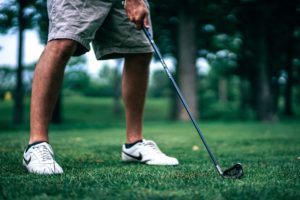 Golfers are a strange lot; they actually talk to their golf ball on the course. “Come on ball, stay there! Come on be right! Go, go, go! Sit down!” as if anything said to a golf ball would be heeded. Actually, though it is foolish, I have found myself vainly coercing an unsympathetic little white sphere at times. Foolish I say because that ball cannot listen or respond, the reason being is that all travel information of that ball has been given at the point of departure. The trajectory. The spin. The direction. The distance. The speed. All informational DNA has been downloaded at the point of departure. In less than half a second, while that ball is on the clubface, all of the information will be given to that ball as to how it will fly. Unfortunately, no amount of begging or enticement will have any affect. Once that ball leaves the clubface the destiny of that ball is set. And, no, the wind turns a deaf ear as well as the ball, and does what it will.

The same is true of bullets. Once that bullet leaves the gun, nothing from the shooters point of control can manipulate it. The only control that shooter has is while that bullet is still in the gun. Again, all of that informational DNA will be given to that bullet at the point of departure.

Theologically the same is true for people. We have a point of departure, it is death. When we leave this earth, our eternal destiny is confirmed. The only influence we have on our afterlife is in the here and now.

The Bible tells us in Luke 16:23-29 about the miserable state of those doomed to hell. In Hades he (the departed rich man) lifted up his eyes, being in torment, and saw Abraham far away and Lazarus in his bosom. And he cried out and said, “Father Abraham, have mercy on me, and send Lazarus so that he may dip the tip of his finger in water and cool off my tongue, for I am in agony in this flame.”  But Abraham said, “Child, remember that during your life you received your good things, and likewise Lazarus bad things; but now he is being comforted here, and you are in agony. And besides all this, between us and you there is a great chasm fixed, so that those who wish to come over from here to you will not be able, and that none may cross over from there to us.” Abraham makes it pretty clear that there is no way over the chasm from hell to the place of comfort. The rich man had sealed his fate by his choices made while on earth.

In verse 27-28 the rich man begs that his brothers could be warned by somebody going back to tell them, but Abraham continues on in verse 29, “But Abraham said, ‘They have Moses and the Prophets; let them hear them.’” Abraham is saying that there is sufficient information on earth for people to make the correct choice. God has made it clear in His Word. That brief half-second on the clubface is our life as we walk upon the face of the earth, and the point of departure is death. There is nothing you can do about it after that. No amount of begging from anybody will do any good. No amount of prayers or offerings. You cannot pray others out of the grip of hell. The destiny is sealed for all eternity.

Many would argue with this, though are without biblical justification. We are not going to be “prayed out of hell.” And, contrary to the notion of reincarnation, we are not coming back to earth as cumquats or salmonella bacteria or any other life form. The writer of Hebrews tells us, “And inasmuch as it is appointed for men to die once and after this comes judgment” (Hebrews 9:27).

You have the information to make a wise choice right now; it is God’s Word and the salvation promised therein. Choose well!… Now!