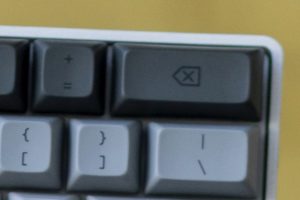 What an impact correction devices have played in the realm of written communication. From the eraser, to white-out, to the marvelous “backspace” button on our computers, how invaluable that button has turned out to be in creating error-free documents! That little button is insatiable. With the simple press of a finger it will swallow up single letters, pages, or even entire documents clearing the way of any mistake-laden, potentially embarrassing communiqués.

I got to thinking, what if life came with a “backspace” button? How would we use it? What would you choose to “delete”? Would you elect to remove those less-than-brilliant actions you performed in high School? How many of those spoken “gems” of words would you opt to cancel out? Maybe you would use it to rescind a relationship that went sour, or a bummer of a business transaction? I think we would all use that button for something.

What about if we could utilize that button throughout the course of history? Would we delete Hitler and the entirety of WWII? Would we delete the black plague of the 14th century? Attila the Hun?  How about taking it all the way back to the Garden to the actions of Adam and Eve? Better yet, the words of Satan in the Garden? Or maybe all the way back to the rebellion of Satan himself? What would we consider the “best” events to eradicate from human existence? And where would we draw the line?

The fact is we all have regrets. We all have our little red wagons full of junk that we drag along behind us, usually evidences of times when we were not fully walking under the authority of the Lord. And that “baggage” extends to nations as well.  So where does that leave us? Where is there hope?

Things surely were pretty bleak but God is in the business of redemption, and has a way of taking care of things. A little later God paints a picture of his redemption that awaits them. Joel 2:25 says, “Then I will make up to you for the years that the swarming locust has eaten, the creeping locust, the stripping locust and the gnawing locust, my great army which I sent among you.”  God is actually communicating that the consequences or discipline had been sent by him! Consequently though, He is asserting that He has the power to make-up for the damage that they brought upon themselves.

No, we don’t have a backspace button, and it probably would be pretty dangerous if we did, as we would undoubtedly carelessly over-use it anyway. But even though we can’t make all those things “never-to-have-been” by simply hitting a button, we can move forward into the redemption which God has for us, but that is only through believing in Christ! If we are in Christ, He has a great plan for us. It may not always be easy, or feel easy, but it will be covered by the sovereignty of a majestic God.Whatever you have done. Wherever you are at – Let him begin to make up to you those years that were lost.

Whatever you have done. Wherever you are at – Let him begin to make up to you those years that were lost.

Come to him through Christ!