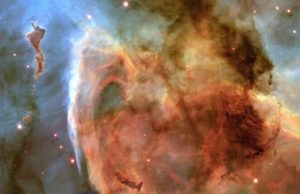 One of the conditions of Scripture is that we do not have a visual picture or a soundtrack to accompany it; instead we have a word picture. So, when we begin at the account of creation one can only imagine the cataclysmic response to the words of the Lord as the breath and word proceeded from the mouth of the Creator, “Then God said, ‘Let there be light’; and there was light” (Genesis 1:3). We do know for certain this was not a casual suggestion, nor was it a passive hopeful wish. It was the command of God expressing the will of God by the power of God. Anything less than perfect reaction was not optional – all elements had to obey.

If the laws of energy are indeed a divine constant (and, I presume that they are), then somewhere after the semi-colon of that verse, there was incredible magnitude of visual display and thunderous release of energy: sound and light.  I wonder if we tend to have the mute button “on” in our minds as we read these words, sort of like watching my dad’s super-8 movies of our childhood fireworks parties (anybody under 30, ask your parents). I wonder if, in our minds, we simply visualize the turning on of a ceiling light as in our houses. Silent. Simple. Illuminating. Hmmm.  No, I would imagine that the creation experience was anything but that!

What a display it would have been regardless of the presence of an audience or not. (I am not sure if the heavenly host had been created, but had they been, what a treat they would have been privy to! (Job 38:7)). In any case, I am certain the Lord appreciated His own handiwork, and that He was indeed glorified.

The events that took place to generate the planets, stars, galaxies, and cosmological systems were anything but serene. I have to believe there were incalculable photons, electrons, atoms, and neutrons colliding in perfect orchestration in response to their Creator’s demand to produce that summoned illumination. We’re talking power; I would imagine unparalleled physical power that launched myriads of universal objects into orbit in the aftermath. And I am guessing that it was loud. Oh yeah, real LOUD!

I am simply focusing on that sublime awe-inspiring level of force that propelled those celestial objects into their divinely ordained courses so many years ago. Power that would hurl, in one fell swoop, massive orbs millions of miles, fusion and fission, masses and gases burning, illuminating, twirling and swirling, yet in the ever-expanding flawless choreography of universal expanse. Can I say in all respect, “Bravo, God!”?

And yet, some seek to revoke that glory from the Living God by insisting that simply, over time, and random chance, it just…happened. As if someone could deem himself “unaccountable” if he dismisses the very real Creator-God as a fairy-tale notion of pious fiction. Um…Nope. Still accountable. “This is the judgment, that the Light has come into the world, and men loved the darkness rather than the Light, for their deeds were evil. For everyone who does evil hates the Light, and does not come to the Light for fear that his deeds will be exposed” (John 3:19-20).

In that darkness so long ago, God willed light, and separated the dark from the light. Two thousand plus years ago He willed Light into the darkness once again as He sent His Son into the world of darkness to bring illumination. In John 8:12, Jesus affirms, “I am the Light of the world; he who follows Me will not walk in the darkness, but will have the Light of life.”

It is the work of Christ, and that alone which separates those who walk in darkness from those who will walk with God.