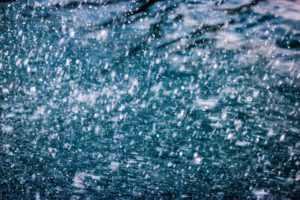 A couple of years back the Owens Valley had a huge rainstorm over a couple of days. Houses were flooded, grocery stores were emptying their shelves as people panicked, and mud was spewing over the roads. The fish hatcheries were filled as the mud flowed over the roads. The water caused untold damage and sent tons of debris to defile the Owens River.

Just like that river, every day our minds are barraged with information, much of it worthless. Messages from the TV, radio, newspapers, the internet, magazines, and people all move in our direction, and most information is not all that good. Even watching the “best” of news channels can get quite discouraging. It seems like our world is a river filled with debris that flows to our minds. No wonder we have issues with depression, failure, distraction and discouragement. Our minds can get clogged up with the junk we have to deal with and cause us to have trouble focusing on God’s will for our lives.

Most of us just accept that wave of pollution as a part of life, but the truth is when that mass comes our direction we have two choices in dealing with it; we can let in come into our minds, or we can let it pass on by. In effect that wreckage comes to a fork in the road, and we have some say as to which direction it flows. Even though many of those things are opposed to God, I have all too often allowed that mess to make its way into my head.

Paul’s advice to us in 2 Corinthians 10:5 is that we take those thoughts captive. “We are destroying speculations and every lofty thing raised up against the knowledge of God, and we are taking every thought captive to the obedience of Christ…” Good words. Put every thought under the authority of the Messiah. That means that we are in control of what we can do with those thoughts. We are not mere bystanders or victims. Paul’s exhortation is to bring those thoughts under the rule of Christ, filter them out. If they don’t fall in line with what He would allow… they’re outta here!

A good rule of thumb to carry throughout the day is Philippians 4:8. “Finally, brethren, whatever is true, whatever is honorable, whatever is right, whatever is pure, whatever is lovely, whatever is of good repute, if there is any excellence and if anything worthy of praise, dwell on these things.” Paul is saying that we should fill our minds with those things that edify the praiseworthy nature of God. God’s Word is the best at doing that; one of God’s filling stations you might say.

Unfortunately, this is a real challenge as it is not the order of the day in our society. People sometimes beat the doom-and-gloom drum as though it is a noble act. Now, this doesn’t mean that just because we declare something, or think about something, that it makes it so. But it does mean we will not be inundated with all that debris clogging up our minds, and we will be able to see the spiritual forest from the earthly trees. It can’t help but affect our outlook.

My friend says, “Garbage in, Garbage out.” If we don’t want to pass garbage to others, don’t let it in to begin with. We need to let it go on around us. Guard your hearts and minds, you do have a choice.

Finally, remember the words of Paul to the Romans, “And do not be conformed to this world, but be transformed by the renewing of your mind, so that you may prove what the will of God is, that which is good and acceptable and perfect.” (Romans 12:2). When our minds are renewed for God, we are a witness to God’s will. Now that’s purpose!