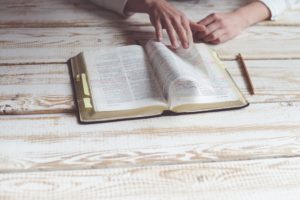 The church with which I am affiliated (the Evangelical Free Church) has a rich heritage of tradition, as do many denominations. It is a “big tent” church that embraces the gospel. And, as such, it is very intentional to embrace the true Church of “Believers only, but all believers” as the body of Christ; that means we recognize the redeemed as greater than any one denomination.  And it believes in staunchly confirming the Word of God as the “Rule of Faith” for all things pertaining to faith, life and godliness; this is the doctrine of sola scriptura. Our predecessors had a saying in Swedish (from whom the denomination emanated), “Var står det skrivet?” In English it means, “Where stands it written?”

The idea is that Scripture is so fundamentally important in our lives that when an idea is promoted, or a teaching is communicated, we want to ask, “Var står det skrivet?” Well, at least, “Where stands it written?” In other words, “where did you find that in the pages of Scripture?” The implication is, “if you didn’t find that in the Bible, I’m not all that interested. I definitely am not committed to restructuring my life’s beliefs around your mere opinions.”

So monumental is it in our understanding of faith and practice, that the Bible is our “rule,” our standard and our guide. Of course we know that God uses his Spirit as well to instruct and guide us, but that makes sense since He was foundational in the writing of Scripture as seen in 2 Peter 1:20-21; “But know this first of all, that no prophecy of Scripture is a matter of one’s own interpretation, for no prophecy was ever made by an act of human will, but men moved by the Holy Spirit spoke from God.” This communicates that true Scripture is not “dreamt up” by any human ideas, but it is initiated by the Holy Spirit of God.

Paul affirms this to Timothy in 2 Timothy 3:16-17, “All Scripture is inspired by God and profitable for teaching, for reproof, for correction, for training in righteousness; so that the man of God may be adequate, equipped for every good work.” The word “inspired” in the Greek is theopneustos, it means God-breathed; that means that when God was involved in communicating Scripture He was breathing it forth from Himself, He was communicating the mind of God. That’s why we take it so seriously.

In the book of Acts, after Paul had delivered a robust “sermon,” the Bereans went away and examined their Bibles (at least what they had of them at that time since Bible wasn’t “completed” until 25 or so years after Paul’s death). Scripture says in Acts 17:11, “Now these Jews were more noble than those in Thessalonica; they received the word with all eagerness, examining the Scriptures daily to see if these things were so.” Anyway, they examined if Paul had truly generated his thoughts and teaching based on the true words of God, in accordance with what the Spirit had breathed. Those Bereans were pretty devoted to the Word of God as well, so much so that Luke identifies them as “noble,” of high regard or character. That should be a lesson to us.

I think the example to us in the 21st century is for us to have that Berean-esque quality; we need it now more than ever. Don’t just passively accept what someone may assert, rather examine professed truth in light of Scripture, and respectfully ask the question, “Var står det skrivet?”