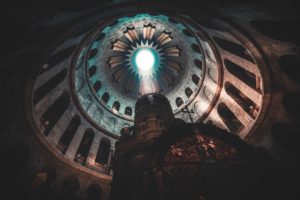 We have all heard the terrifying stories of tragic events occurring due to the neglect of following instructions. Someone walks past the safety line of the gorilla cage, someone else fails to pay close attention at the wheel of a car, and another chooses to remove the saw guard from the table saw. And yet still another fails to keep the fire in a contained area. All of these decisions can yield horrifying consequences, yet the causal mechanism was the same: failure to follow the instructions.

The same is true for the way we relate to God. Yes, God does give us an instruction book, and commands that we follow His precepts and His laws. God demands to be honored and revered. What happens when we fail to walk according to His will and His Word? Devastating consequences. We see it often in the Scriptures, don’t we?

A particularly sobering event occurred in Leviticus 10:1-3, “Now Nadab and Abihu, the sons of Aaron, took their respective firepans, and after putting fire in them, placed incense on it and offered strange fire before the LORD, which He had not commanded them.  And fire came out from the presence of the LORD and consumed them, and they died before the LORD. Then Moses said to Aaron, “It is what the LORD spoke, saying,

“By those who come near Me I will be treated as holy,

And before all the people I will be honored.”‘

Plain and simple, they messed up and they paid for it with their lives. We don’t know if they performed this act in ignorance or defiance, yet the result is the same. Either way, they were sloppy in the way they respected God as holy. They failed to honor him. They came lacking respect to the altar. They desired to offer God “strange fire.” We don’t know precisely what that is, but we do understand that it was not commanded by the Lord. Why would they do that? Were they bored? Were they curious? Were they defiant? Were they testing God? Who knows? That is irrelevant; the point is they were doing something they had not been instructed to do when worshipping God.

In light of what the word of God teaches, how does God view believers today? Have we become all too casual at times in approaching the God of all Creation? God is not our “Buddy,” or our genie in a bottle; He is not our servant, we are His servants created to know and glorify Him. Like Nadab and Abihu we may desire to get a little too “creative,” and temporarily deviate from God’s construct of worship. In that respect, it becomes about us and not about God. Do we come to the altar looking for something new and exciting and different even though it is not in line with scripture? Is worship about us? Do we test God? What kind of strange fire are we bringing before Him? – Lots of questions that demand answers.

What an amazing thing that the Almighty God would desire relationship with us; shouldn’t we approach Him on His terms, with reverence and awe?!

We need to take this seriously.

Now, are you ready to come before God?