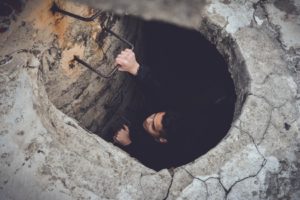 Most of us by now have heard the stories or even seen the amazing rescue of the 33 miners who were trapped in a mine in Chile for 69 days. Wow!  Over two months ago they were working in a productive environment. It appeared to be a healthy, thriving, and productive mine. Things were going great and then something they did caused their world to collapse. They were lost, in near darkness, and limited connection to the world above.

Fortunately those above were motivated to reach the lost, and sought to establish connection, and support them from above. Could they be saved? After 17 days limited communication was established; they were all alive. Small amounts of information were exchanged. Some small portions of food and supplies were sent down. Hope was established. The miners established a leader and a governmental system to keep things in control. Up top crews worked constantly to bring those below to safety. A 2500-foot long hole was drilled into the hard rock earth. A capsule was fabricated that would bring the miners up, one at a time, to safety. Because they listened to those above they were all able to be rescued over 2 months later. They were able to ascend to new life above, not one was lost.

I could not help but think of the parallel of that story to mankind’s existence on the earth. God gave us a great environment to live in. Be productive in. And thrive in. Wow! But something we did caused a massive collapse and sin covered man. We were separated from God. There was distance and a lack of communication. But God continued to reach out to us, to send supplies to us, to take care of us. He sent information to us in the form of His prophets and His Word, the Bible. He told us how to live so we could be united with Him again someday. And finally, He sent His Son to deliver us from the depths of death and despair. Christ was sent to bring us to new life, one relationship at a time.

Afterward many in Chile were wearing tee shirts that praised God saying, “In whose hand are the depths of the earth, The peaks of the mountains are His also” (Psalm 95:4). Those miners were in the depths of the earth, but they were in His hand; they were under His care. But they still had to make the choice to listen to those wise instructions from above if they wanted to see daylight again. Fortunately, all of them did. All chose to make the long journey out of their dark domain, out of their otherwise certain grave. And why wouldn’t they? There obviously was no future in remaining in the pit. They had to obey the words of those above, and it returned a 100 percent success rate.

Unfortunately when it comes to the spiritual realm many will choose to remain in their lost state rather than listen to the voice above telling them how to get out of their predicament. Why would anybody choose to do that, knowing that death is imminent? We don’t need to. YOU don’t need to. God has sent a “capsule” of salvation with your name on it. It is Jesus Christ. Open the door. Get in. He will bring you to new life.