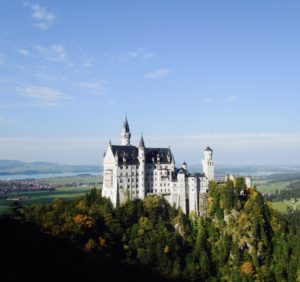 And they lived…“Happily ever after.” How many times we have read those all too familiar words as the iconic fairy-tale ending? As the newly crowned king ascends to his throne, as the beautiful princess finds true love, as the newlywed sovereigns begin their journey of ever-after blissfulness. These words flow well off the tongue and work well in a fairy tale, but sadly enough they cannot sustain the weight of reality.

The truth is these words truncate the story of real-life much too soon. For, at some point in the near future of our fictional character’s lives, “until” will come.  You see, in the very real world is the word, “until.” Until changes the course of action as it implies “up to a certain point in time.” Until suggests that a particular state of being is about to shift.  They lived happily ever after until the king smeared chariot oil on the queen’s new castle linens.

They lived happily ever after until improvements upon the castle were delayed, as the peasants were slack on their tributes.

They lived happily ever after until there were complications in childbirth.

They lived happily ever after until a nearby country waged war upon their kingdom.

They lived happily ever after until a famine ravaged their land.

They lived happily ever after until the grey hair of nobility evolved into ever-increasing pains of age.

They lived happily ever after until, well…until they lived no more.

You never read about that part, do you? But at some point in time someone else, another king and another queen need to enter into the picture to live “happily ever after.”

I live in a world where until is very very real, and intrudes upon my life in a daily fashion. My guess is that is true in your life as well. You see, we do not live in a world that is presently capable of yielding “ever-after” happiness; it all stems back to the very significant until in the Garden of Eden. Adam and Eve had happily-ever-after to the ultimate…until. They were living happily ever after until they went against God’s command and altered the state of being. Creation became adverse. Personal contentions became real, death as a part of life came into the picture, and the happily-ever-after relationship with God ceased at a very real point in time.

Enter in the need for a Redeemer – the promise of someone to offset that which had occurred in the Garden.

Now, Christianity is not the silver bullet to happy life on earth, but it is the only remedy to sin. Faith in Christ, in the finished work of Christ through the blood of Christ, is the key to life eternal with God.

Life is good. Life can be a challenge. Life is the blessing breathed into man so that we might love God and glorify him…but, it does get better. Happily ever after is the life in the life hereafter.

That is the unique promise we celebrate at Easter.

1 Peter communicates it well in chapter 1:3-9, amazing words from the fisherman.

“Blessed be the God and Father of our Lord Jesus Christ, who according to His great mercy has caused us to be born again to a living hope through the resurrection of Jesus Christ from the dead, to obtain an inheritance which is imperishable and undefiled and will not fade away, reserved in heaven for you, who are protected by the power of God through faith for a salvation ready to be revealed in the last time” (1 Peter 1:3-5).

The fact that there is something so awesome and so certain in our future, and the fact that we are so protected by God should be the horizon of our focus everyday. That, my friends, “in the last time” is the happily ever after I’m talking about!

So, why is Peter making this such a point? Because in the following verses- we’re going to be put through the wine press in our journey of life. “In this you greatly rejoice, even though now for a little while, if necessary, you have been distressed by various trials, so that the proof of your faith, being more precious than gold which is perishable, even though tested by fire, may be found to result in praise and glory and honor at the revelation of Jesus Christ.”

I don’t know a soul who isn’t, or hasn’t been pummeled by this fallen world. But God is using that to our own good. We are in the crucible of life for the refining process. God desires to purify us, to bring our faith to a point of maturity to His own glory.

My heart does grieve for the pain we endure but our hope, our living hope is not in the here and now, but in the happily ever after in the life hereafter. In those words are grace and peace.

To God be the glory, great things He has done!