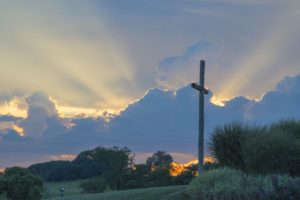 What an incredible picture of grace we see in the 23rd chapter of the Gospel of Luke!

Christ is advancing to His crucifixion, the pinnacle of redemptive history to the world, and along the way we read in verse 32, “Two others also, who were criminals, were being led away to be put to death with Him.” It may seem a bit benign, but I believe that statement is loaded with significance. These two guys are mentioned in each of the other Gospels as well; John calls them men, Matthew and Mark refer to them as “robbers,” but only Luke refers to them as criminals, more specifically “evildoers.” And Luke is the only Gospel which communicates the affirmative response of one of the subjects. You see, I believe this verse is so important because these two men represent the extremes of humanity. Somewhere in the two, we should see ourselves.

We find in verse 33 that because of their crimes they are crucified on either side of Jesus, the Jesus who by the way is hanging on the cross, under a sign which reads “Jesus the Nazarene King of the Jews.” People are hurling abuse at Him, and challenging Him to come down from the cross if He truly is the Christ of God. But Jesus cannot – at least He cannot come down from the cross if He is to be obedient to the Father, and die for the sins of the world. And so, He remains in place to bear the wrath of God.

Surprisingly, the jeering continued from one of the condemned, “One of the criminals who was hanged there was hurling abuse at Him, saying, ‘Are You not the Christ? Save Yourself and us!’” (Luke 23:39). There is nothing on this man’s agenda but deliverance from his present condition. No acknowledgment of who Jesus is, no desire to humble himself, just a self-absorbed man.

The other criminal, presumably his cohort in crime, calls him out, “But the other answered, and rebuking him said, ‘Do you not even fear God, since you are under the same sentence of condemnation? And we indeed are suffering justly, for we are receiving what we deserve for our deeds; but this man has done nothing wrong’” (Luke 23:40-41). Several very important acute observations are made by this man, who himself is agonizing in pain. Yes, God is pouring out His grace upon this sinner. First, the man recognizes that Jesus is the Christ – that He is God! Perhaps, he reads the inscription upon Jesus’ cross and confesses it as the truth. Second, he acknowledges that he himself is guilty, and for that he justly suffers, but that Jesus is unjustly condemned.

Out of these confessions is prompted an invocation, a plea to the Divine, “And he was saying, ‘Jesus, remember me when You come in Your kingdom!’” (Luke 23:42) in which he understands that even in His present condition upon the cross, Jesus is coming into His Kingdom – the man affirms that there is an afterlife! This man understands that he needs salvation by some other measure outside of himself. This is a fantastic prayer for deliverance, not from his present physical suffering, but deliverance from the consequences of his sin.

I would imagine that the words, the precious words of Christ could not come soon enough to the dying man’s ears. “And He said to him, ‘Truly I say to you, today you shall be with Me in Paradise’” (Luke 23:43). What words of blessed assurance were these words, that Christ will indeed remember him. Unfortunately, we also get the very real picture that the other criminal will not be remembered by Christ.

Can we say, this ‘good’ criminal cuts it pretty close; he was only breaths away from eternity without God.

We have just witnessed grace: the Gospel call, repentance, acceptance, prayer, and blessed assurance all being played out from atop the crosses of Golgotha.  The end result? Salvation.

I said earlier that I thought this was so magnificent a scene because these two represent humanity – “evildoers”, just like you and me; there are some who would reject Jesus as the Christ, and those who would cry out to Him to save them. Only two choices.

Two Criminals – Which one are you?

Both are guilty and have received the verdict of death for their sins.

Both are staring at an eternity of judgment, separated from God.

Both can do nothing to change that sentence, in and of themselves.

Both are mere breaths away from falling into eternity without God.

…The other embraces him…and is remembered!

Christ’s assurance of salvation applies equally to all those who trust in Him.