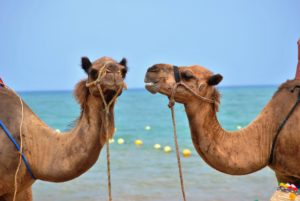 April Fool’s Day – Well, we’ve made it to that time of year again when we celebrate a particularly odd day in society, a day in which pranks, tricks and hoaxes are “sanctioned,” well, sort of. In any case, practical jokes rule the day (Doesn’t “practical” imply that there is some sort of pragmatic value?). It’s difficult to ascertain when this traditional day of tomfoolery was initiated but many historians speculate it was in the mid-first millennia, perhaps in the Middle East. But I would suggest it goes much further back than that, in fact to the Garden of Eden.

Obviously, one major difference is that THAT day was not a harmless, nor a practical joke. Surely this was the cruelest hoax, or shall we say “lie” ever perpetrated upon mankind, and with no “practical” value whatsoever. Satan convinced Eve that there was no penalty for disobedience, or at least less of a penalty than God had stated. This little “prank” has cost the human race dearly; not only do we suffer a physical death from it, but a severance in our intimacy with God because of it. Satan won that “water-cooler trick.”

Satan’s imbecility has not come to an end. He works constantly upon all people to deceive and mislead, and consequently, he deceives many; it’s a numbers game. One of his most “popular” of high jinx is to convince the world that there is no God. To him, this is his crowning achievement whenever he succeeds. Psalm 14:1 says, “The fool has said in his heart, ‘There is no God.’ They are corrupt, they have committed abominable deeds; There is no one who does good.”

The point is that once Satan can convince man that there is no God, then there is little to no accountability for those who are fooled. After all, if there truly were no God, then there would be no moral, ethical or theological code by which man needs to abide; mankind’s morals are in anarchy and there is no consequence, at least that is what Satan wants us to think.

But a lesser-known scheme is for him to merely convince us that there is no moral code anyway, and wow, how he has done this in the modern world today! When Satan has us convinced that absolute truths are questionable, and the entire moral code is upside down, we are in trouble. Isaiah, 5:20 gives us the picture. “Woe to those who call evil good, and good evil; Who substitute darkness for light and light for darkness; Who substitute bitter for sweet and sweet for bitter!”

I hope that sounds familiar because you don’t have to look too far to see that taking place everywhere. Sometimes Satan uses the media, sometimes the educational or political systems. He especially uses religious institutions, whatever he can. In turn, we have distorted every definition in the realm of life, ethics, marriage, and sin.

Don’t fall for his adolescent ploy, he’s a punk who didn’t get his way. And now he has “issues” and wants others to suffer for it. He’s looking at you. So be on guard. 1 Peter 5:8 cautions, “Be of sober spirit, be on the alert. Your adversary, the devil, prowls around like a roaring lion, seeking someone to devour.”  Be smart and evaluate everything in light of God’s Word, the anvil of Truth.

Satan doesn’t rest and neither should we.