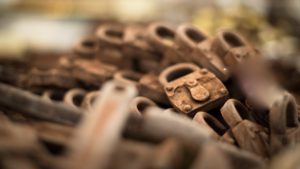 Many of us can remember the Great Houdini, the great escape artist who would have himself handcuffed and wrapped up in chains and then be immersed in a large tank of water all the while a large clock would be counting down the last seconds to his imminent death. He would have to struggle through the straight-jacket and chains to the life that awaited the dismissal of his final binding.  It seems invariably he would get to the last restraint and just when everyone had thought it was “too late,” he would escape.

It seems that there are some parallels here to our life on earth, only in reverse. What I mean is, most of us think we are moving towards that certain death each and every day, every day adding more and more bindings of restraint. When I hit 30, I began to put on weight. When I hit 40, my eyesight began to dim. When I hit 50…what was I going to say? Oh yeah, let’s just say my memory isn’t all it used to be. Anyway, some would say we add more and more shackles throughout our lives till we can endure no more and then it’s over; time’s up.

But I want to suggest that is not the case for those of us who have a restored relationship with God. In fact, it’s just the opposite. We continue to cast off the encumbrances of life and move toward the goal of eternity with God. We eventually get to the point where our earthly bodies are the only remaining encumbrance hindering us from that glorified eternal relationship with our Creator.

Though it may be hard to see, death is a blessing from God. It is the final step before glory. If we were to never taste of death we would never receive our glorified bodies, free from all the ailments these present-day vessels hold. We should be thankful God doesn’t curse us, constrained to these broken bodies for all time.

Psalm 116:15 declares, “Precious in the sight of the LORD, Is the death of His godly ones.” It sounds strange to our human ears, but God knows that our ticket home to Him is through death, the end of pain and suffering. Paul says in 2 Corinthians 5:6-8, “Therefore, being always of good courage, and knowing that while we are at home in the body we are absent from the Lord, for we walk by faith, not by sight, we are of good courage, I say, and prefer rather to be absent from the body and to be at home with the Lord.”

Death is that last tether between two worlds. Now, you know I am not saying we should do anything to hasten our end; in fact, we are to care for ourselves so that as long as the Lord gives us breath, we may serve Him. But we should not fear when He calls us home to be with Him forever. But that time my friend is reserved for the Giver of Life to decide.

Savor life while it is being served but know that our true “home” is being with the Lord!