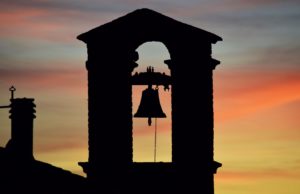 On Wednesday, June 26, 2013, the bells of the National Cathedral in Washington rang in support of, and in celebration of the Supreme Courts’ decision to effectively “strike down” a key part of the Defense of Marriage Act and Proposition 8, which defined and restricted marriage to being between a man and a woman. The Court failed to make a decision supporting either one and in so doing they eroded the biblical definition of marriage. The Court failed to support the will of 7 million voters in California who in 2008 defined marriage as being restricted between a man and a woman, the biblical model.

The National Cathedral, designed to honor God and His will, had proclaimed the glee of the people of United States to openly and willfully go against the will of God and wanted to announce that to the Sovereign. We would have paid Him no greater disrespect had we taken a giant pea–shooter and “shot him in the eye” in defiance.

This is just the latest in a long chain of malevolent events which were designed to “liberate” our nation from God’s plan and authority. The Monkey Scopes Trial (1925) which sought to strip God as the Creator of life; the revocation of the prayer in schools (1962) which sought to reduce the need for communication and relationship with God; Roe versus Wade (1973) which in no uncertain way demeans the value of human life, and now this, a directed assault on biblical marriage – a clear dismissal of one of the most valued of God-given institutions.

I wonder what would have been the response if after a conservative “victory” the bells of the National Cathedral would have applauded. I am sure that multiple rainbow flags would have scoured the streets and airways in protest. Yet, I fear it is I who will be branded the unloving, offending and intolerant conservative Christian. I humbly ask the question, “Is there any way in which I can publicly disagree with the unbiblical definition of marriage and not be labeled a ‘hater’ or a ‘homophobe’?” If there is please tell me.

I have strong faith and certainty in the validity and truth of the Bible, and yet it stands in stark contrast to the flow of morality in the 21st century. Yet, is it not a valid point of view that I am “entitled” to maintain without being branded a “simple-minded” angry hater? After 2000 plus years why is the Judeo-Christian view fully and freely assaulted (hatefully so at times) in the name of “tolerance”?

I believe, in part, I know the response. It would go something like this. “You have no right to judge. Why don’t you just leave it alone, we’re not hurting anybody.”

Let me respond this way. It is like a lifeboat of morality, culture or society which is floating on the sea of consequence and all the occupants are sitting low in an effort to keep the boat from capsizing in the surf, yet one asserts his “right” to stand up, and maintains that right to do so as it is not hurting anybody else. Still, in reality, the rest are affected as the center of gravity is altered, and the boat becomes unstable.

Just an alert to those who hold a view contrary to the biblical definition of marriage – Christians feel “the boat” (our culture, society, our traditional values, and our nation) is unbalanced and on the verge of capsizing if it hasn’t already done so; same-sex marriages and sexual engagement contrary to biblical mandate are not the only causes but they are two of the big ones. That is part of the reason we make such a loud cry for obedience to God and His Word. The actions of the few affect the journey of the many.

The Supreme Court has made many blunders along the way and yet, in doing so has in no way eroded the morals and verdicts of the true Supreme rule of God.

Cathedral bells are not just rung in celebration but also in mourning, announcing death and sadness. The tones that were “heard by God” on Wednesday the 26th were such as this, a dirge, a lament which broke the heart of a loving God who indeed has standards to be met which indeed have been violated.

The Christian objective is not to spread hate but truth. Our purpose is not to bring judgment but light. Our goal is not to bring division but the love of God the Father to the world in which we live, which brings about relationship with God. Unfortunately, that poorly expressed zeal at times comes across as hatred, judgment, or religious fanaticism for which I am sorry.

God’s kingdom is made up of imperfect souls, souls however, which are saved by trusting in, by following Christ as Lord and Savior. I am one of those imperfect souls but I seek to abide by the truth held in the Holy Scriptures.