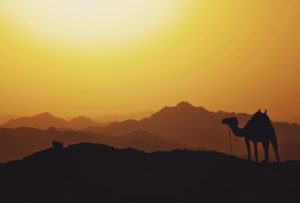 Could you imagine approaching your girlfriend of many years and asking her to marry you? Imagine telling her that you would follow her to the utmost parts of the earth, uh, but oh, there is a little something else you need to tell her – uh, you would like to bring along another girl as well into the relationship. What do you think she would say? Yeah, you know what she would say. No girl in her right mind would agree to such a condition in a covenant relationship such as marriage, and neither does a holy and righteous God.

We see this demonstrated for us in Luke chapter 18:18-25. A ruler questioned Him (Jesus), saying, “Good Teacher, what shall I do to inherit eternal life?” And Jesus said to him, “Why do you call Me good? No one is good except God alone. You know the commandments, ‘DO NOT COMMIT ADULTERY, DO NOT MURDER, DO NOT STEAL, DO NOT BEAR FALSE WITNESS, HONOR YOUR FATHER AND MOTHER.’  And he said, “All these things I have kept from my youth.” When Jesus heard this, He said to him, “One thing you still lack; sell all that you possess and distribute it to the poor, and you shall have treasure in heaven; and come, follow Me.” But when he had heard these things, he became very sad, for he was extremely rich. And Jesus looked at him and said, “How hard it is for those who are wealthy to enter the kingdom of God! For it is easier for a camel to go through the eye of a needle than for a rich man to enter the kingdom of God.”

A rich man comes to Jesus and asks what he must do to inherit eternal life. After reminding the man of the commandments, Jesus responds that the man must relinquish his one remaining god…money. This man “believes” in Jesus, at least intellectually. He “believes” in Jesus’ existence, and perhaps His power to some degree. I have no doubt that he is sincere as demonstrated by his remorse at the end of the passage, but still in the end he refuses to place himself under the authority of Christ.

The bottom line of Jesus’ command is that this man desires to smuggle his one remaining god into the Kingdom of Heaven. Jesus understands what he is trying to do, but there are no other gods allowed into the Kingdom of Heaven but the one and only, true living God, Yahweh. The man is broken because he is so close yet so far away from attaining that which he sought. He did not understand the cost of eternal life.

The questions to us are, “Have we tried to smuggle any of our own gods into the Kingdom?” “Have we deluded ourselves into thinking we have made it into a covenant relationship with Christ while dragging a ‘camel’ along with us?” “Do we think that we have succeeded without God’s notice?” The answer to all is, “No.” Actually, the answer is a resolute, emphatic “No!”

Not to be really dramatic or judgmental, but maybe it’s time to take inventory, a serious inventory. Any closet camels? The offer is clear for us as well as the rich man, treasure in Heaven, which far surpasses anything this world has to offer.

Which side of the needle are you really on?