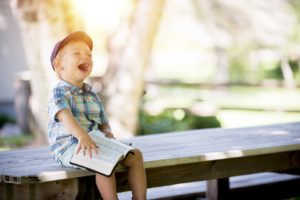 During a recent vacation, I had the opportunity to attend a chapel service at a school; it wasn’t a university, a college, or a high school, or even a church school, but it was a very special service which included people of the young kind. Boy! Did I have a lesson to learn? My heart was moved as the children sang, and talked and shouted out their heart’s cries. It is no wonder that Christ said, “Let the little ones come to me.” Let’s just say my heart was moved.

At one point the children were asked for prayer requests, at which point some of the standards were offered. “Pray for my daddy’s job.” “Pray that the baby wouldn’t cry all day.” “Pray that we would all have a good day.” Normal fare for prayers, however, one request kept on being repeated over and over again. “I got an owie.” “Me too.” “Pray for my owie.” Seemed like over half of those kids had ‘em. With the supplication for prayer, the child would offer for inspection the damage done to an elbow, knee, or shin.

Etymologically, the word “Owie” is derived from the word “ouch”; it is defined as, “A painful, but often minor injury, as in a bruise or a scratch,” or“a wound,” but honestly that injury is anything but minor, at least in the minds those precious kids. In fact, the mere mention of, and recounting of the event queues the corporate stream of tears to flow.

Those owies may have been relatively insignificant in light of all damages that could have occurred to the human body, but in view of those little souls, those boo-boos were pretty major.

I thought to myself, “Boy, I wish those owies were the only ones I had to worry about! Those kids don’t even know what life has in store for them in their futures.” But, there I go thinking like a grown-up again!

Life can be pretty rugged at times. Face plants. Bike spills. And trip and falls. Scrapes and scratches. Real ones, and speaking metaphorically. As we get older, the externals become a little more able to bear; it is those unseen owies which compromise our life’s focus. It is often those life owies we don’t allow others to see.

The truth is, the tougher boo-boos are often those that we don’t wear on our epidermis, they are owies of an emotional kind; financial, relational, and some of regret; they are deep on the inside; they are boo-boos of the heart.

Kids get that; they embody some pretty special traits: authenticity, transparency, vulnerability, and trust. I hope it is not too theologically simple to say, that God cares about all our owies and boo-boos. No wonder Christ enjoyed being in the presence of these young souls.

“And they were bringing even their babies to Him so that He would touch them, but when the disciples saw it, they began rebuking them. But Jesus called for them, saying, ‘Permit the children to come to Me, and do not hinder them, for the kingdom of God belongs to such as these. Truly I say to you, whoever does not receive the kingdom of God like a child will not enter it at all’” (Luke 18:15-17).

Lord, help me to grow up to have the heart of a child.