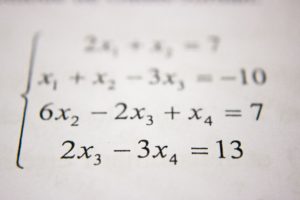 When it comes to mathematics, specifically to the solving of an equation, oftentimes it is only one missing component that unlocks everything. One such challenge was an equation known as Fermat’s Last Theorem; it was a theorem posed in 1637 by a man named Pierre de Fermat. To put that into perspective, that was around 350 years ago, only 17 years after the Pilgrims made their way to North America in 1620.

This theorem stated that there are no whole number solutions to the equation:

when N is greater than 2. It might not seem all that profound, but remember, the pilgrims preceded this equation by less than 20 years. In the ’90s (the 1990’s), after 350 years, Andrew Wiles proved the theorem, and in so doing garnered the 2016 Able Prize, essentially the Nobel of mathematics. Figures! He had found the equation as a child in the library and was obsessed by it, by the challenge to prove the theorem.

Mankind has been faced with many such seemingly unsolvable problems over the course of creation. Interestingly enough they are only challenging to us as God knows those answers. Sometimes, eventually, we answer those difficult problems. Sometimes we are correct, sometimes we may think we have the correct answer when in truth we do not. Sometimes, we may rightly identify a problem, only to offer up a bad solution.

One such equation is tucked away in the very early chapters of Genesis, Chapter 3:15. You see Adam had just sinned, and court was in session with the verdict and sentences being handed out. Adam’s sentence was death, death to his physical body, and to his relationship with God. But here in verse 15, the verdict is toward Satan; God says to him, “He shall bruise you on the head, and you shall bruise him on the heel.”

In the dawn of mankind, an equation identifying a needed solution to the problem of sin is prophesied. But, what were those unknowns?

So, our equation, or theorem I believe, goes something like this:

You see if Man added to Sin produces Death, the sum of man’s disobedience to God is death. Satan brought this about and changed the course of history. God had provided mathematics of His own which included how Mankind was to be made right again and enjoy Eternal Life with God. But. There was an unknown…X! How would God do that? Who would that person be? What would be able to offset the monumental damage of Sin? How would this great soteriological equation be resolved?

Though we don’t have total clarity here in the Genesis passage, throughout the Old Testament, God progressively issues Messianic prophecies of what it would be that would solve that equation.

Isaiah 11:1- He would come from the lineage of Jesse (David’s father).

Jeremiah 23:5- He would be a king and deal wisely.

Ezekiel 34:33- He would be a shepherd and feed His sheep.

All these breadcrumbs are hints and bits of information moving through the Old Testament pointing to the Christ so that the Messiah, the Anointed One would be recognized for who He was when He eventually arrived in time. In addition to these, there are over 300 more of these prophecies pointing toward the Messiah, so that we would rightly recognize Jesus as the Christ.

Don’t get this one wrong.

Centuries removed from the Garden, God provided the great Solution to this mystery so that you could be relationally restored to Him. Eternal life in Heaven is a constant of exponential value, for infinity!